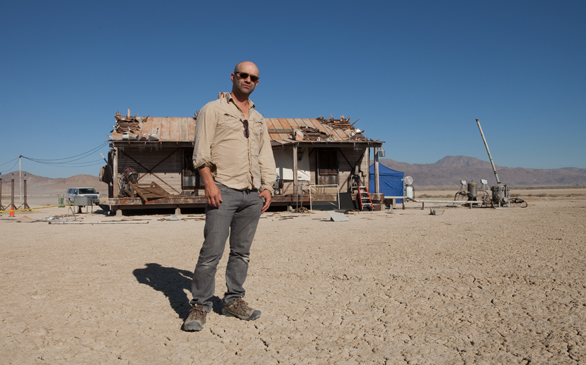 Director Scott Stewart on the set of Priest in 3D.
(Credit: Scott Garfield)

If you are in the mood to see sexy, fanged creatures with skin that dazzles in sunshine, Priest may not exactly be the right vampire movie you are looking for. What the film offers, however, is a gripping hybrid of post-apocalyptic horror and western action, with 3D visual effects that verge on the kind of sublime opera that brings an audience to a standing ovation.

The movie’s masterful conductor is Scott Stewart, whose background includes being the co-founder of the visual effects studio that was behind Iron Man, Pirates of the Caribbean: Dead Man’s Chest and Sin City.

“The vampires that we see, at least right now, are the sexy, alluring type, and they represent a very different metaphor of sublimated sexual desire or eternal youth,” the director says. “Ours are a little different in the sense that our movie is more about a world that’s been in warfare for a very long time, a war with a race that is alien to us. They aren’t alluring, sexy things. They’re primal and feral and animalistic, and they have a culture that is foreign. They represent an enemy that we don’t understand.”

Indeed, Priest is a darker film that explores a more serious theme, threading in age-old issues that are especially relevant today.

“It occurred to me, that this was a story about sacrifice, and especially about soldiers who go off to fight a war they believe is a noble cause but come back devastated by it. Society has moved on without them. Instead of coming back as heroes, they are social pariahs. And that’s what happened to the priests,” says Stewart.

Not to say that the movie lacks room for lightness or an attractive cast that can rival your favorite vampire TV show. The lead role of Priest is played by acclaimed British actor Paul Bettany of The Da Vinci Code and Legion, another Stewart creation.

The director says, “He and I became very good friends over the course of working together during the last few years. It’s so difficult making movies. It’s so hard to just make one, let alone make a good one. So when you work with somebody as good as Paul, you want to go back to them again because it’s one less thing you need to worry about.”

Maggie Q, whose exotic good looks in real life can command the attention of a theater full of people, stars as the very dexterous Priestess.

“It’s a wild ride for sure,” she says in a press release. “But not only have we created an action genre film that people are going to enjoy, there is totally authentic, emotional experience behind this movie. We have great actors and a great storyline that dovetails nicely with all the action.”

Serving as the perfect foils to the devoutly dutiful Priest and Priestess are two young, passionate star-crossed lovers. Cam Gigandet departs from the predatory vampire role he portrayed in Twilight and plays Hicks, a sheriff who embarks on a heroic quest when a pack of vampires forcefully takes the girl he intends to marry, Lucy, played by Lily Collins.

Lily’s blood-curdling scream opens the movie and motivates the plot of the story. For a damsel-in-distress, she remarkably performs the role with a lot of spunk and spirit. And as Collins has proven in The Blind Side, the actress definitely deserves more acclaim than just being a famous musician’s daughter.

Stewart says, “I didn’t know anything about her history. At the time we cast her, The Blind Side had not come out. There was very little material on her. She was on our tape of auditions that my casting director brought me one day, and I was like, ‘who’s this girl?’ She was better than everybody else in this particular situation, and it took some work to convince the studio to deal with someone that was not well known at the time. And boy, are we all really glad that we did.”

Although Priest was not made to satisfy your sexy vampire fix, it will astound with its stunning visuals and an ensemble cast that is not only talented, but not bad to look at either.

Priest in 3D releases in theaters May 13.