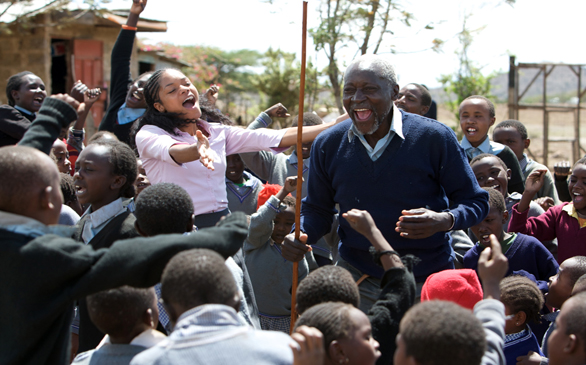 Movies based on the extraordinary accomplishments of actual people usually elicit empathy, and The First Grader is no exception. A dramatic piece, which tells the true story of an illiterate 84-year-old farmer who fights to go to school when his country introduces universal education, it is both tearful and touching.

In a small, remote primary school in a Kenyan village, hundreds of children are jostling for a chance for the free education newly promised by the Kenyan government. One new applicant causes astonishment when he knocks on the door of the school. His name is Maruge, and he is an old Mau Mau veteran in his 80s, who is desperate to learn to read. He fought for the liberation of his country and now feels he must have the chance of an education so long denied – even if it means sitting in a classroom alongside 6-year-olds.

An engrossing and ultimately uplifting film, full of vitality with a sprinkling of much needed humor, it explores the remarkable relationships Maruge builds with his classmates and also sheds light on the sordid part of British colonial rule.

At one point, Maruge tearfully tells his fellow classmates, some who are 80 years his junior, “A goat cannot read or write. If you don’t learn how to read or write, you will become an old goat like me.”

Through Maruge's journey, audiences are taken back to the shocking untold story of British colonial rule 50 years earlier when Maruge fought for the freedom of his country, eventually ending up in the extreme and harsh conditions of the British detention camps.

There’s also resentment and opposition, which comes from the parents of Maruge’s classmates, who object to him sharing a class with their offspring. Others ambush him when he is featured in the media, further adding to the ailing veteran’s woes.

Directed by Justin Chadwick (The Other Boleyn Girl), The First Grader stars Oliver Litondo, Naomie Harris (28 Days Later) who plays the head teacher who fights the authorities to keep Maruge in her classroom.

An incredible, triumphant testimony to the transforming force of education in Kenya, The First Grader is an inspirational story of one man’s fight for the right to learn. Emotionally taxing yet dutifully rewarding, it’s an important and carefully crafted film, which is well worth seeing.

The First Grader releases in select theaters May 13.