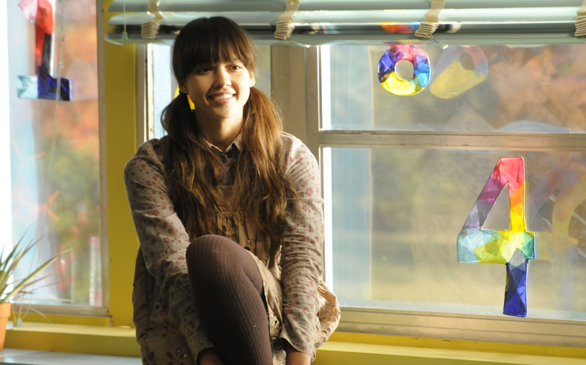 The film starts with an animated sequence that depicts a tale of folklore in which a king must sacrifice people because the kingdom is overpopulated. Each family must sacrifice a member, and one family refuses to do so because of their love for each other so they each agree to cut off a limb from their bodies. This gives the audience a clue to the ultimate message that comes from the film.

The movie stars Jessica Alba as Mona Gray, and her character is that of a girl who is conflicted by life and ends up searching for herself as she gets older. Her father (played by John Shea) is plagued with dementia.

The film begins strongly but then is plagued itself with bumbling dialogue. The actors and actresses play their parts strongly, but the problem lies in the script. Mona is the centerpiece of this film; her character is flawed and pinched by her father’s demise. She cannot cope with the fact that she cannot run on the track with her father anymore and tends to eat soap from time to time because of a deal with herself that she would not delve in her abilities unless her father gets well.

Her math teacher Mr. Jones (J.K. Simmons) inspires her slightly, but she refutes him in the beginning because of her rebellious nature. He ends up retiring and opening a hardware store and is still visible in the troubled woman’s life. A nudge from him inspires Mona to accept a job as a math teacher as well.

The film strives to portray its message by reminding the audience constantly of the demise of each of the characters, but it feels as if the writers as well as the director are hitting nails into the heads of the audience.