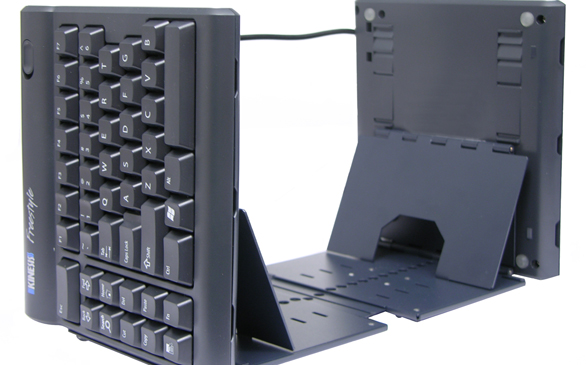 A lot of keyboards claim to be ergonomic but really only slightly improve on an inherently unnatural bodily position. The Freestyle Solo is the most versatile and truly ergonomic keyboard available.

The keyboard is split down the middle into two separate parts that are connected by a removable pivot tether. This allows you to adjust the two sides to the most comfortable angle. Or, you can completely separate the two halves and move them further apart (8.5 inches max) for a more natural, relaxed arm position.

This separation also allows for further configurations using one of five accessory kits (sold separately). The other adjustable positions include a tented mode and the 90-degree vertical Ascent option. The Ascent configuration is the most ideal because it preserves the natural position of your arms and doesn’t put pressure on your wrists. Palm supports and a separate numeric keypad are also available.

The keyboard also features driverless hotkeys, which can cut down on mousing. It includes Internet hotkeys like back, forward, search and home, as well as editing keys like cut, delete, copy and paste. These are exactly the kind of repetitive tasks that can build up and risk causing a repetitive stress injury.

Both Windows and Mac versions of the keyboard are available. (kinesis.com)

Dictate is the Mac version of the popular PC software Dragon NaturallySpeaking, which allows you to control your computer using only your voice. You can dictate an e-mail, surf the Web or chat with friends without using your hands.

After a training exercise in which you learn to talk clearly and the computer learns to recognize your voice, you can begin basic dictating and will most likely be pleasantly surprised by the results. However, without giving the user manual a thorough reading, you’re most likely to come up against some problems fairly quickly. Because of the wealth of available commands to learn and the myriad operations the experienced computer user normally executes without a second thought, one will at first feel fairly inhibited having to rely only on his voice. But with some studying and practice, you’ll soon be dictating swimmingly.

One of the most important things to learn right off the bat is to not violate “The Golden Rule,” mixing verbal commands with keyboard strokes. Doing so can have apocalyptic consequences on the document you’re working with. This can be especially difficult and cause further frustration while learning the program. Adding to the confusion is that certain voice commands are treated as keyboard strokes by Dictate. When working within Dictate’s notepad, a “cache document” command can be given to essentially wipe the slate clean. Usually, this will do the trick.

Dictate comes loaded with commands for Mac Mail, Safari, Microsoft Word, iChat and more but works best as a secretary, taking down everything you say with surprising accuracy. As for the dream of fluidly accessing your computer’s files and navigating programs, the technology isn’t quite there yet. Safari integration is definitely the program’s weak point. Trying to make your way through an Amazon or IMDB webpage, with their bevy of links, can be somewhat arduous. Dragon NaturallySpeaking for Windows has the ability to click on an appropriate link when spoken, but Dictate apparently does not. You wind up having to rely on the MouseGrid, a choose-a-number winnowing down process, which hones in on an area of the screen so that you can give the mouseclick command.

What can be especially trying is that some of the commands, even within Dictate’s own notepad, just plain don’t work. The recognition window will accurately reflect the command you spoke, but the appropriate action will not be taken.

The bottom line: If you’re looking for a way to navigate your computer without a mouse, Dictate can carry some (but not all) of the load. If you are tech savvy, there is some further tinkering and jury rigging you can attempt to improve functionality. If, however, you are simply looking for a dictation tool, Dictate is for the most part reliable and accurate. Another solution, also from Nuance, is MacSpeech Scribe, which can transcribe your spoken word audio files.