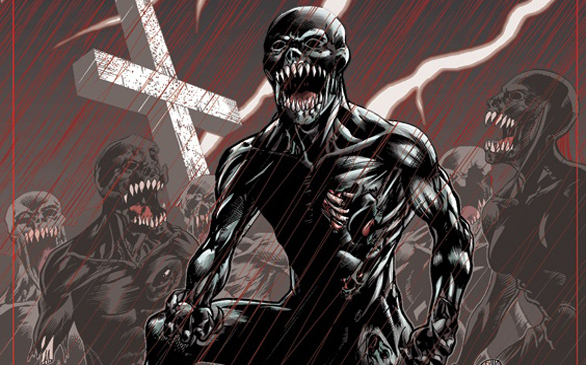 If it’s the author’s job with any book or graphic novel to take the reader on a journey, then the writers of the graphic novel Hell House: The Awakening (Chad Feehan and Ryan Dixon) have definitely done so.

Hell House: The Awakening follows a group of teachers, workers and students at Covenant Christian Academy in Texas. The school is preparing for their annual Hell House show. For those of you not familiar with Hell Houses, this actually does happen every year. Churches across the United States have a space every October that is used to host their annual Hell House. The space is shown as a haunted house with each room revealing specific sins and terrors of hell, and there is usually a heaven area at the end.

The opening of the Hell House: The Awakening graphic novel finds some of the main characters preparing for their annual hell house. Hitch stands out as one of the few, from the beginning of the novel, who does not seem to hold many of the beliefs of his peers at his school. After Hitch has an angry outburst with the popular campus type rockstar Pastor Craig Simeon in front of the school, he is forced to help out at the annual Hell House or face the consequences of getting expelled. Soon after what begins as a ‘normal’ night for Covenant Christian Academy teens literally turns into a living hell when they are forced to use their wits to survive Hell House. Who survives?  What happens to turn Hell House into a nightmare? You’ll have to read Hell House: The Awakening to find out the rest!

From the beginning of the story, the snappy dialogue and graphic pictures (drawn by Tsubasa Yozora) had me hooked. This isn’t a graphic novel for the sensitive type. I found many connections between the characters’ struggles and the reality of our world today. We live in a world where religious fighting still happens. A world where someone could murder or steal from someone and attend church the next day if they’re not caught. A world where it’s OK to bomb civilians if they don’t believe what you believe. It’s admirable that Hell House: The Awakening tries to tackle such a sensitive subject and provide entertainment so that it doesn’t come off as too preachy.

How would this fit in with Hollywood? Well, many books and graphic novels are the inspiration for many great films and TV. Several religious groups were up in arms about the Da Vinci Code, and did that hurt the film? On the contrary, such press actually helped the film to open big worldwide. Some might protest the content of Hell House: The Awakening, but that has never stopped Hollywood and the TV world from focusing on religious matter.

Many of the themes in Hell House: The Awakening are relevant today. But at the end of the day, the graphic novel seems to ask, who the hell are we to judge? Hitch, the main character and one of the heroes of the story, summed it up perfectly when he addressed a diverse group of people that would not normally have been together in any other situation.

“We are here. We need to stick together. That’s all that matters,” he says.

That’s an awesome way to think about the world we live in today. Hell House: The Awakening effectively brings such an idea to life.