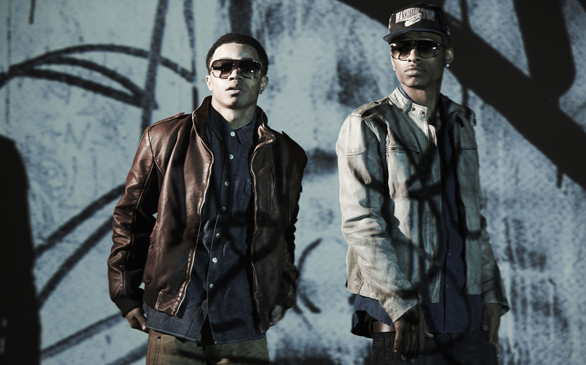 New Boyz broke off into the summer of 2009 in style, with a soon to be classic hit in the hip-hop community. Remember when almost everyone was doing a peculiar dance to a rather intriguing hip-hop blast?

“You’re a Jerk,” which placed in the Top 25 of the Billboard Hot 100, became an instant viral hit. Now, both members of this highly electric duo are getting ready to release Too Cool To Care. This new album features a different version of New Boyz. It is a slightly modified and developed edition of them, as times have changed in the industry.

“The album is definitely way different than the first one we dropped,” Dominic “Legacy” Thomas confesses. “We hope the fans check out the album so that they can see what is up with us now.”

Too Cool To Care’s hot single is titled “Backseat” and features the Cataracts and Dev. This track was released in mid-February, and it is already a hit party track. The Cataracs are a hip-hop indie-pop duo composed of David “Campa” Benjamin Singer-Vine and Niles “Cyrano” Hollowell-Dhar. Dev, on the other hand, is a p-and-coming female singing sensation.

“This is like a summery, spring album,” says New Boyz’s Earl “Ben J” Benjamin. “We never want to be stuck in the same category. The first album revolved around the ‘jerk’ movement. With this album, we wanted to be more creative and show ourselves creatively as artists while doing more songs with females, the rock scene and techno. We definitely have songs for every genre.”

So, what is so different and hot about “Backseat” and with New Boyz in general? Well, the duo experiments with electro hop and electropop, and it sounds extremely good. This is particularly true because of their unique rapping voices. Interestingly enough, “Backseat” has reached No. 26 on the Billboard Hot 100.

“We just want to prove that we can do something different from the ‘jerk’ era,” Ben J discusses exclusively with Campus Circle. “We are reaching other levels musically.”

And it’s a success. New Boyz attained it in the past when debuting, and they are doing it again.

New Boyz is a hip-hop duo consisting of Ben J and Legacy, who were born within one day of each other in October of 1991. They’re not even 20 years old yet, but these dudes are quite aggressive in the industry. They work hard, and their combined charisma is substantially paying off with positive fan reception.

An example of that is their upcoming gig at this year’s KIIS FM Wango Tango event May 14 at Staples Center. This popular concert festival features the likes of Ke$ha, Pitbull, Jennifer Lopez, Lupe Fiasco, Selena Gomez, T-Pain, Cobra Starship and Jason Derulo, among others. Is this hitting it big? Of course, and I am sure that New Boyz are happy about sharing the stage with so many fascinating musicians from all genres.

Natives of Hesperia (just 70 miles northeast of Los Angeles), Ben J and Legacy met in high school. At first, musical differences set them apart. However, soon enough, both knew that something special could be derived from their passions and distinctive desires musically.

“We met in high school. I used to see him around,” Legacy says. “We both loved music, and we were both rapping. We just came through together. It just happened. Now, we are like brothers.”

Ben J planned to attend San Diego State University in order to play collegiate football, but that quickly changed when deciding to stick around and collaborate with Legacy. And here they are as New Boyz, with a lot of room to grow and progress in their success.

Ben J knows the duo can reach diverse flow levels, and this is what they formulated on their latest album.

“Our style is automatically hip-hop,” he convincingly adds. “With the hip-hop, we can change our flows. This album right here [Too Cool To Care] is going to be crazy. It is four or five times better than the first one, and it is much more creative.”

Too Cool To Care will be available May 17. New Boyz perform May 14 at Wango Tango. For more information, visit thenewboyz.com.