The Black Angels: Seeing Light Where There’s None 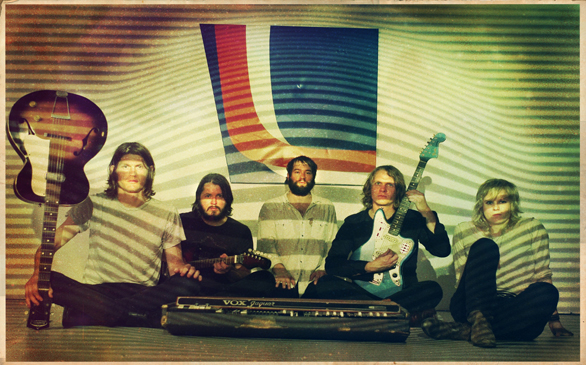 Doc Brown had a DeLorean and H.G. Wells had a time machine to travel back in time, but Austin-based Black Angels need only their instruments to bring back the ’60s and ’70s with their intrepid take on psychedelic rock.

That era of hippies, counter culture, war, heavy drugs and experimentation ferment in each fuzzy, brooding note the Black Angels produce in their music. It’s easy to dispel them as a stoner rock band because of their drawn-out songs and vocals that evoke Grace Slick’s, but there’s more to their brand of rock than any label can hope to sum up.

“The music in the ’60s, specifically, was the most creative time in American music,” frontman Alex Maas says. “There was a lot of turmoil and a scary future, and I think a lot [of] creativity was spawned [from that]. I think that whenever things are easy, there’s less creativity because [people] aren’t inspired by anything.”

Maas finds labels funny. He doesn’t mind the stoner rock references or the variations of psychedelic rock that are bestowed on the Black Angels. All that matters to him is how you get to the music and whether you enjoy it.

“Everybody has references. It’s like, ‘How are they trying to convey the message?’ You have to have a reference point,” Maas says. “I think [labels] are kind of fun to make up. We used to call our music Native-American drum and roll.”

Like a matryoshka doll, the Black Angels shed their layers to the core and rebuilt. They scaled their drone-y guitars back a bit and incorporated a faster rhythm section with vocals to compliment. Their first two albums suggested a sound the Black Angels were trapped inside, but 2010’s Phosphene Dream breaks through their sometimes-monotonous sound and evolves it without straying too far from their roots.

Phosphene Dream is a record of firsts. It’s the first Black Angels album to be recorded outside of Austin (at Sunset Sound in Los Angeles) and their first record on a new label (Blue Horizon). The band continued breaking out of their shell by working with renowned producer, Dave Sardy (Oasis, OK GO, Marilyn Manson).

“It was amazing. For one thing, we’d never worked with a producer before. Before we ever met Dave [Sardy], we were kind of like ‘I don’t know. It could be weird,’ but it worked for the Beatles so it could be great,” Maas continues. “He would encourage us to try different things, get us out of our comfort zone. [He] helped the band evolve in ways that we weren’t trying.”

In a phosphene phenomenon, the retina interprets light when there is none. The most common phosphene experience you can have is by rubbing your eyes. The ensuing bursts of color and light are the product of pressure being directed onto the retina. The phenomenon serves as a theme to this brand-new Black Angels who believe cool music is congruent to cool imagery.

“We’ve always been big on having the package represent the sound. I remember going to record stores and buying CDs when I was younger and thinking if the albums look cool, it’ll probably have one or two good tracks on it,” Maas says with a laugh.

The Austin quintet continues to make splashes in the underground scene, particularly SXSW, and have their music featured on TV shows like “Fringe” and “Californication,” yet the mainstream eludes them.

“I think there are tons of amazing bands right now, but not a lot of people know about them because you have people controlling what people listen to. Although we have control ourselves with the Internet, the majority of people are listening to the radio,” Maas says.

Maas isn’t in pursuit of music industry accolades or a spot on the Billboard Top 40 to vindicate his musical vision. He simply wants more people to check him out. The band’s profile continues to grow with major collaborations like the two he’s had with famed British band UNKLE and spots on soundtracks.

It’s all about music, and great bands understand that. Bands with huge followings can pander to the masses, but for people who want something with more meaning, there are bands like the Black Angels who deliver without compromise.

The Black Angels perform May 14 at Fox Theater and May 15 at the El Rey. For more information, visit theblackangels.com.