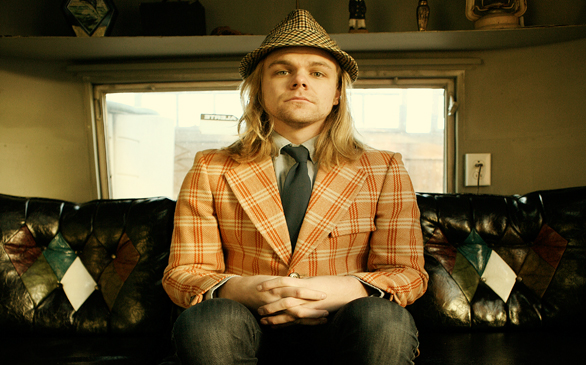 Swimming With Dolphins and Tooth and Nail Records have launched the “Sleep to Dream” Remix Opportunity on Indaba Music and are offering $1000 cash to the best remixer. Would-be producers will find everything they need at IndabaMusic.com to construct and submit their version of “Sleep to Dream,” the first single from the upcoming Swimming With Dolphins album, Water Colours.

The Grand Prize winner gets the money, a signed copy of Water Colours and other band merch and will have their remix featured on all of the band’s Web sites. Two runners-up get the signed album, merch and a year-long Indaba Pro membership while 10 entrants get an honorable mention prize of the Indaba Pro membership. Winners will be determined in part by fan voting. Submissions must be in by May 25.

The calendar says that we’re just a little over a month from the beginning of summer, but according to Los Angeles-based folk rocker Benny Marchant, there’s some cold weather coming. Or rather, Cold Weather is coming, as Marchant’s debut full-length album is set to drop May 31. The singer-songwriter says that last year’s five-cut Conversations Missed EP gave only a hint of what’s blowing in with Cold Weather.

“I didn’t want to give too much away, but I really wanted to give a great and balanced representation of myself and the upcoming full-length album,” explains Marchant. “I think I did a good job with that. I want the listener to know that I’m not trying to be a catchy commercial pop artist.”

Look for a local show to be announced soon at bennymarchant.com.

Have a Beer to Honor Robert Johnson

It’s hard to believe, but the legendary bluesman Robert Johnson, the guy who supposedly gave his soul to the devil in exchange for guitar playing prowess, only made 42 recordings. Johnson died at the tender age of 27, and this month marks the 100th anniversary of his birth. In homage to the milestone Columbia/Legacy Records has just released The Centennial Collection; a two-CD set containing all of Johnson’s known recordings – 29 songs and 13 alternate takes.

But that’s not all! Thanks to Dogfish Head Craft Brewery you can now get your buzz on while you get your blues on by swigging their small-quantity limited-run Robert Johnson commemorative brew, Hellhound on my Ale. The drink’s name is a play on words taken from one of Johnson’s most famous songs, “Hell Hound on my Trail.” Hellhound is available in California and about half of the other States.

Josh Groban is about to embark on his first full-scale global arena tour in four years; although the Straight to You World Tour has Groban playing large venues, several things are being done to give the shows a more intimate feel. The stage has been designed and will be lighted in a manner that gives the impression of a smaller venue, and Groban will lessen the distance between himself and audience members by taking questions via text during the show and answering them between songs.

“Gearing up for a tour, there’s always the anticipation of something special; the excitement of traveling across the country and the world, of meeting and sharing with the fans, of exploring musical worlds in a way not possible in the studio,” Groban says. “It’s the most fun I have in my whole career, and I want it to be the most fun my fans have as well.”

Those who present a valid student ID at the box office at any Straight to You show can purchase a ticket for $25. The tour’s Los Angeles stop is Aug. 17 at the Staples Center.

Liverpool band the Wombats have released a new album, The Wombats Proudly Present… This Modern Glitch. The band is crossing the pond for a few select shows in conjunction with the release, one of which will be at the Troubadour June 1.

Iron and Wine and the Low Anthem are releasing cuts from their recent Daytrotter.com sessions on vinyl as a 12-inch split release. Daytrotter Sessions features four songs from each act.