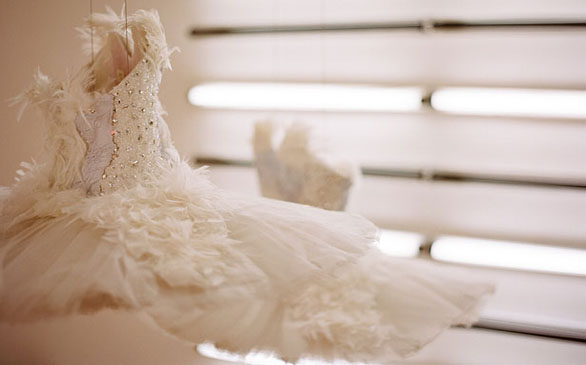 Get up close and personal with Black Swan costumes at Rodarte: States of Matter
(Credit: Autumn de Wilde)

It’s the typical lazy afternoon in your eighth-grade fifth-period class. Mrs. Smith comes in holding a VHS tape (They’re those black, brick-shaped things that preceded DVDs.), and your eyes glisten in the triumphant joy that instead of sitting through another blackboard-squeaking eternity, the teacher takes pity on your exhausted 13-year-old souls and lets you see a movie instead.

“Today we’re watching the documentary Lincoln at Gettysburg: The Battle and the Address.”

Those were the days when the word “documentary” meant a snore fest that crushed pre-adolescent hopes for classroom entertainment. Of course, that has changed within the last couple of decades. Thanks to films like Fahrenheit 9/11, Super Size Me and more recently, Catfish, the documentary has become an enjoyable platform for information and social commentary.

The Academy of Motion Picture Arts and Sciences is celebrating the achievement of the genre in its 29th annual showcase of contemporary documentaries. The free series is currently being held every Wednesday night at the Linwood Dunn Theater through June 1. This week, the theater is playing Soundtrack for a Revolution and Every Little Step. Soundtrack for a Revolution documents the music of the civil rights movement, featuring performances by Wyclef Jean, the Roots and TV on the Radio. Directors Bill Guttentag and Dan Sturman, and producer Dylan Nelson will be present for a Q&A. Every Little Step, on the other hand, tells the interesting story of 17 dancers auditioning for the Broadway revival of “A Chorus Line,” a musical that is itself about dancers and the audition process. Director Adam Del Deo will be in attendance for a Q&A as well.

From the theater to the museum (another word that has surpassed its history class field trip connotation), 2011 Academy Award nominated Exit Through the Gift Shop manifests through the Art in the Streets exhibit at the Museum of Contemporary Art. The acclaimed Banksy documentary follows the amusing story of Los Angeles-based, French immigrant Thierry Guetta and his exploration of the growing street art culture. Running through Aug. 8 at the Geffen Contemporary, the works of many of the artists featured in Exit Through the Gift Shop, including Banksy, Blu and Shepard Fairey, are on display giving enthusiasts the chance to see some of the greatest graffiti and street art all in one spot.

Artistic vandalism not your cup of tea? MOCA is also holding an exhibit that brings the movie Black Swan to life. Needless to say, critical to Natalie Portman’s character development were the beautiful costumes worn throughout the film. The Rodarte: States of Matter presentation at the Pacific Design Center features the ballet costumes designed by Kate and Laura Mulleavy for the film, among their other collections. Ending on June 5th, this is the first solo West Coast exhibition of the award-winning fashion designers, bringing fans of their work and the film closer to the intricacies of the sisters’ multi-layered creations.

A few blocks away, the Los Angeles County Museum of Art is holding a film series in anticipation of the May 27 release of The Tree of Life starring Brad Pitt and Sean Penn. Exploring the journey of Jack from his 1950s Midwest childhood to his disillusioned adult years, The Tree of Life is an intriguing cross between drama and fantasy. The series, titled The Elemental Cinema of Terrence Malick, celebrates the film’s director as “one of cinema's greatest poets.” From May 13 to 20, the museum is screening four Malick features including his directorial debut Badlands, the South Pacific war movie The Thin Red Line, the period film Days of Heaven and his last picture, The New World, starring Colin Farrell and Christian Bale. Actors Sissy Spacek and Jim Caviezel will be present at the screenings as well as production designer Jack Fisk and costume designer Jacqueline West. The museum will also have an early showing of The Tree of Life on May 24 for LACMA film club members.

With enlightening films, progressive graffiti, exquisite tutus and an iconic director’s works, it’s time to leave your middle school disappointments behind. Watch some of this generation’s best documentaries and venture into a museum or two near you!