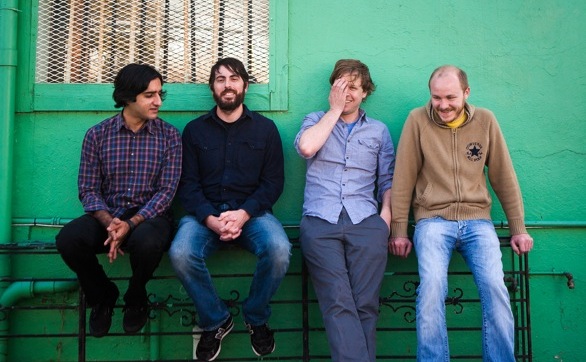 (Credit: Nick Simonite)
The air was warm and the lawn packed as Explosions in the Sky took to the stage. The band couldn’t have picked a better venue for their first L.A. show in several years. A cemetery was somehow quite fitting for a band as ambient and beautiful as Explosions and their 90-plus-minute set was a thing of haunting brilliance.

For those uninitiated, Explosions in the Sky is an all-instrumental post-rock four piece hailing from Austin, Texas. With their Lone Star flag hanging proudly, the band bobbed and weaved through songs from their musical tenure including several tracks from their latest album, Take Care, Take Care, Take Care. It was a surprisingly emotional experience for all parties involved.

The sold-out audience didn’t have the kind of stand up and jump around energy associated with most rock acts and most seemed content lying down next to their picnic baskets and stargazing. The outdoor ambience was enhanced by the myriad of tombs and graves surrounding the field and complimented the band’s music tremendously well. The sound acoustics were similarly impressive though the lighting setup was at best serviceable.

Any fans of the band know of their impressive musical range the ability to blend a mellow build up into a blast of sonic intensity. Goosebumps were universally shared during many a moment during the show as the four-piece jammed out with such energy that it became immediately obvious of the passion being put into this performance. It was difficult to decipher many songs from each other, but it all blended together so well one would be hard pressed to find anyone in the crowd who didn’t find themselves entranced by the performance in its entirety.

One didn’t realize how many fans had flocked into the cemetery park until the show was over. It was more or less a somber, sobering experience as the quiet mob of fans exited the park. What we had gone through was a musical experience not simply a concert. Guitarist Munaf Rayani closed the night with a quote that would be representative of the entire night thanking the audience and proclaiming that it was “one of the most beautiful things they’ve ever been a part of.” I don’t think anyone in the audience could have said it better.