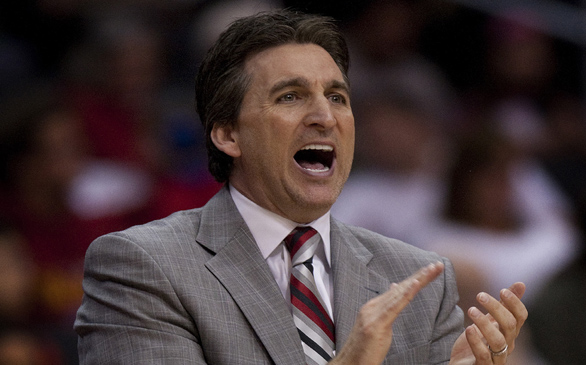 Juan Pablo Angel came off the bench to score a goal for the Galaxy.
(Credit: Chuck Myers/MCT)

The Los Angeles Galaxy version of the Big Three lifted the team to an impressive 4-1 win over visiting Sporting Kansas City Saturday night at the Home Depot Center in Carson before a crowd of almost 20,000.

“I obviously thought we played well, it was a fabulous result. I can’t be more proud of our team,” Galaxy head coach Bruce Arena says during the press conference. “I think we played well and are starting to play better as a team.”

Midfielders David Beckham, Landon Donovan and striker Juan Pablo Angel each netted goals in the team’s fifth win of this campaign. Los Angeles is now 5-2-5 with 20 points and still sits atop of the Western Conference standings, followed by FC Dallas’ with 17 points.

“We just said that if we passed better we were going to create chances. We continue to grow as a team, and our passing is improving,” Arena says of the message given to the team at halftime. “When you play a team like Kansas City that tries to get after you, pressure the ball and turn you over, if your passing is good, once you get through the initial pressure, you are going to create some chances.”

Even though the Galaxy experienced a 1-0 deficit after an own goal from defender Omar Gonzalez, they responded quickly and effectively. Five minutes after being down, Beckham trapped the ball and managed to pivot his body past a Sporting defender, who eventually fouled him inside the box.

An awarded penalty kick was scored by Donovan, who also scored one minute into the second half. Forward Chad Barrett registered the assist after passing a brilliantly well-played ball to Donovan, who gathered control and fired an unstoppable shot past goalkeeper Eric Kronberg. With his sixth and seventh scores, Donovan is now the leading scorer of the MLS while equaling his total from one year ago when he collected just seven goals.

“It feels good to be on top of the league in points as a team, and that’s the goal. But it’s always nice to score, it’s always good to hit the net,” Donovan remarks. “Like I’ve said a million times, when you put yourself in good spots and are you are aggressive, the chances come. Sometimes they go in and sometimes they don’t, and right now they’re going in so we’ll just keep going.”

Sporting’s head coach Peter Vermes points out Donovan’s importance on the pitch. “He is a game changer, there is no doubt,” Vermes confesses.

Coming in as a substitute, Angel did not disappoint. He scored his second goal of the year on a sneaky finish past two defenders and the visiting goalkeeper in the 64th minute; Barrett received the assist.

The Galaxy saved the best for last. With a direct free kick from about 25-yards out, Beckham powerfully discharged a curled kick over the opponent’s defending wall, past Kronberg and into the upper left corner of the goal net. Beckham bended, and he bended the ball well.

“I like to score goals. It is not the biggest thing that I go to games thinking about. My game has always been about getting assists, and if can get a goal then great,” Beckham states regarding his goal. “I always enjoy scoring goals, who doesn’t? I think more importantly tonight the performance of the team, the character of the team especially like I said coming off the road trip and the travel it is a great performance by us tonight.”

With the win, the Galaxy are now 3-0-2 at home while carrying the best mark in the league thus far this season, including a 3-0-5 record against Eastern Conference opponents.

The Galaxy, whose four goals are a season high, next play Chivas USA in the MLS SuperClasico on Saturday, May 21, at 7 p.m.