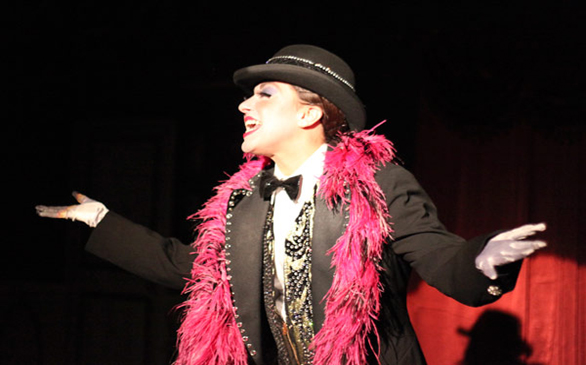 I know almost zero about the stage production of “Cabaret.” I know that Liza Minnelli starred in the film adaptation, and because of it the gays love her. You can understand if I feel excluded; I don’t belong to the club. But that goes for all theater – it can be a little intimidating until you get over yourself and open up to an altogether different kind of performance energy.

As I sat down to DOMA Theatre Company’s production of “Cabaret,” I was tense. I had prepared myself for two hours of camp and sequins. There was a little bit of camp and plenty of sequins, but the surprise was that I was entertained from beginning to end. The costumes were sexy and dangerous. The band was small but crucial. The staging was simple and effective. Renee Cohen as the MC was engrossing and electric. When it was over, I wanted more. When it was over, I felt that maybe I was an honorary member of the club. I couldn’t sing the songs, but I could certainly squirm in my seat to the beat.

That’s not to say there weren’t problems with the production. Caitlin Ary as Sally Bowles was endearing but seemed woefully miscast and out of place. Rory Alexander as Clifford Bradshaw came across like a buffoon and an asshole. The Kit Kat Boys were a little broken down, but the Kit Kat Girls more than made up for it with their sass, attitude and legs. In spite of the problems, which I can assume were mostly due to opening night jitters, I had a damn good time. Even an uneven production, it seems, can have a substantial payout. I would recommend “Cabaret” with a bullet.