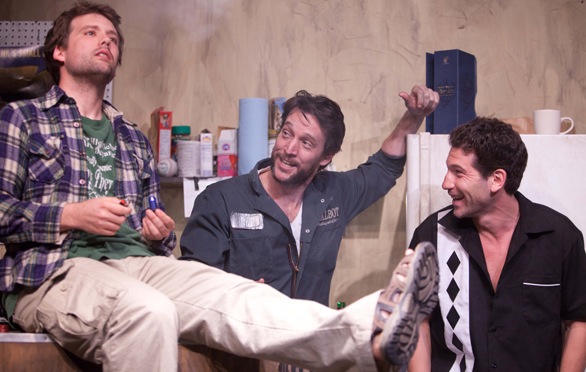 Frank, Swaino and Packie have been friends since childhood, only to have drifted apart in recent years. A trivial fight between Swaino (Jon Bernthal, “The Walking Dead”) and Packie (Michael Redfield) has left the two on non-speaking terms, and it’s up to Frank (playwright John Pollono) to bring the group together again – albeit with a little deception.

What follows is a seesaw of emotions that teeter between sweet and sour memories in an alcohol and marijuana fueled reconciliation process. However, there are questions about Frank’s real intentions for bringing the others to his modest small engine repair shop, especially when Frank invites Chad (Josh Helman), a Northeastern University freshman, over to sell him ecstasy.

Frank clearly has issues with his anger and the fact that he’s started drinking again, and his sudden willingness to try drugs has his friends on edge. Pollono plays the character of Frank with a deep understanding only possible for the playwright. At varying points in the play one can relate, sympathize and fear his actions.

Bernthal brings the perfect amount of hubris expected to play the vanilla-moisturizer-using character of Swaino, and his interactions with fellow actor Redfield are some of the funniest moments amongst this exceptional cast.

“Small Engine Repair” is a seemingly simple story that suddenly shifts into something much more complex, with hysterical and tragic results. Pollono and director Andrew Block do a wonderful job weaving in crucial plot points throughout, and everything from set pieces to dialogue come together in an unexpected climax.

What may have started as an exhibit of a guy’s night out really turns into an exposé into the range of friendship and what friends are really willing to do for each other.