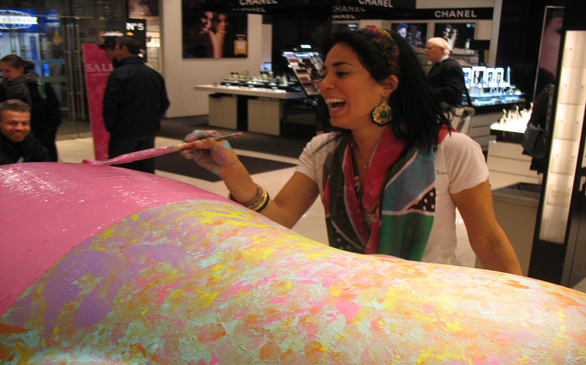 As I sit at Figtree’s Café in Venice watching the ocean waves on a sunny morning, Sona Mirzaei strides into the café. She is filled with excitement. This dark haired beauty recently took Copenhagen by storm after she became the only American artist to participate in the exclusive international art project “Elephant Parade Copenhagen 2011.” Combining her love of wildlife and her passion for the arts Mirzaei is committed to spreading the word about the plight of Asian elephants.

The Elephant Parade is an open-air art exhibition of 100 fiberglass elephant statues painted by 100 artists. In the past century, Asian elephant populations have plummeted from over 250,000 to less than 35,000. The increase of the human population coupled with the loss of more rainforests each year has had a dramatic impact on the numbers of elephants in Asia; additionally, more than 400 elephants a year are killed by trains, mines and poachers. Thankfully, the Elephant Family has found an innovative way to encourage an impressive array of notable artists to contribute to the public awareness and conservation of Asian elephants.

Mirzaei explains why and how she became involved in the Elephant Parade: “I have always adored elephants and all kinds of animals. When I learned about what has been happening with so many Asian elephants, I was absolutely horrified and decided there and then that I would find a significant way to make a difference. I’d been interested in collaborating with Danish artist Per Hillo for some time, and it suddenly occurred to me, that we would be a perfect team for this project.

The rest of course, is history. Mirzaei led the way, prepared an application which was then sent to the Elephant Parade committee and reviewed along with thousands of others. The exciting and surprising news for Mirzaei was that she was indeed accepted and would be given the opportunity to create her elephant in front of thousands of onlookers at a popular, high-end department store in central Copenhagen called Illum.

As she tells of her adventures, it’s obvious that she was touched by the experience: “I had no idea, that there would be so many people. They were very interested and enthusiastic while we were there painting, it was really refreshing.”

Aware that HRH Prince Henry of Denmark would also be creating his own elephant for the Elephant Parade, Mirzaei assumed the public would scarcely take notice of her.

“For two weeks, seven hours a day, I would go to work on our elephant at Illum, and I never stopped being amazed at how many people seemed to truly care about what we were doing,” she says.

When the subject turns to her elephant, Mirzaei is all smiles.

“I wish I could keep it, but I think it would probably overwhelm my sitting room,” she laughs. “In any case, if last year’s auction is anything to go by I’d probably be outbid.”

Mirzaei and her partner, Hillo, decided to name their elephant Triumph of Unity. Mirzaei’s enthusiasm is touching as she explains their decision: “We feel that if all religions and all people regardless of background or belief were to unite for a worthwhile cause that humanity could indeed triumph over all of life’s many adversities. Let us start to believe again in the power of love so that we can protect not only Asian elephants, but all living things!”

It was Mirzaei’s idea to factor all religions and concepts into their design, and the crown was meant to serve as a way of uniting these ideas.

In June, the artists will find out where their Elephants will be placed. The elephants will be distributed all over Copenhagen and auctioned off later in September. Mirzaei and Hillo are excited to be attending the auction on Sept. 8 in Copenhagen.

Art
Homeless artist wants to ‘be the light’ on LA’s skid row
1,354 views

Art
Muralist Robert Vargas is painting a towering history of LA above the traffic
5,229 views
bid=||