Cost of a Soul: Will Blagrove is on the fast track to fame. 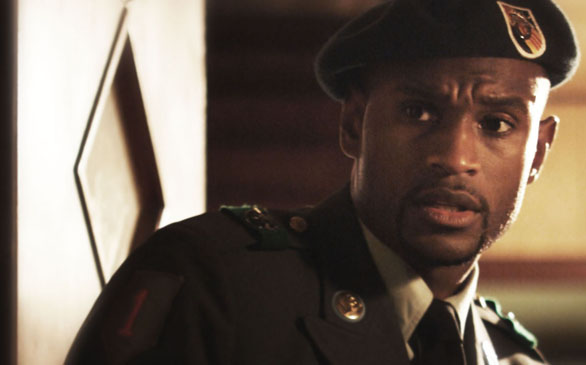 Will Blagrove as DD Davis in Cost of a Soul
(Credit: Courtesy of Cast Shadow Productions, LLC)

There are two good reasons, according to Will Blagrove, to watch the movie Cost of a Soul.

“It’s relatable and is a well shot film,” says the actor, who stars alongside Chris Kerson in the Sean Kirkpatrick-directed drama about two wounded soldiers returning home from a tour of duty in Iraq.

An actor on the fast track to fame, Blagrove, who ditched a law career for acting, was not only attracted to the film’s positive message, but felt a connection with his onscreen character DD Davis, with whom he shares a lot of similarities.

“I am a big fan of roles that motivate people, and I love positive roles. The first thing I read about my character DD is that he was trying to do good, and good guys usually win. I related to him as he’s on a mission to do right by his family,” says Blagrove, who made the 100-mile journey from New York to Philadelphia just to audition for the role.

“I got a call from my manager for an audition in Philadelphia, drove a 100 miles and went for it. Then I got a call back and went back another 100 miles,” adds Blagrove, who has a huge passion for the arts. “I did a play in high school and got bit by the acting bug and just knew after doing that play that I was supposed to do this [acting]. I took as many credits as I could in college and graduated in three years, for I knew that I wasn’t going to continue going to law school.”

A New York native, who had a recurring role as Brendan on the recently canceled daytime soap “All My Children,” Blagrove has worked with several directors including Spike Lee and James L. Brooks and had no apprehensions working with first-time director and screenwriter Kirkpatrick, a Penn State film graduate.

“From the initial audition, I knew that I wanted to work with him,” Blagrove says. “He’s really that actor’s director. I have worked with a pretty good amount of directors, and there’s something about Sean. He was just so hands on and knew what he wanted. We had such a great collaboration, and when we worked on set, we lived in a house for a month and really bonded. I am still really good friends with him, and I think that translated throughout the entire filming process.”

Shot in 18 days on location in the streets of North Philadelphia in some of the roughest neighborhoods in America, Soul’s main characters DD and Tommy (Kerson) find themselves trapped in the same slums they joined the military to escape from, and as they reevaluate their choices, their lives become entwined in a web of crime, corruption and violence.

“We shot in some really rough neighborhoods and having that camaraderie helped us out,” Blagrove says. “The mission of the film was to showcase what it is like for so many kids in so many rough areas. Crime is just a circulation of violence, and sometimes it is not a happy ending.”

For Blagrove, who took on a lot of physical and mental research to perfect his role as DD, making Soul was a somber eye-opener.

“I did a lot of research on what it was like for a soldier coming off the war in Iraq, and I have a totally new appreciation for our troops,” he says. “I already had that appreciation, but I had to talk to our troops and interview them to see what it’s like from their perspective. Seeing gray, sand and dust and the lack of the sound of a bird chirping every day, the lack of green grass everywhere and then to come home to it, just made me so much more appreciative of what they go through. That’s in addition to the amount of work it takes to become a soldier – the physical attributes that a soldier has. This film really gave me an appreciation for our troops.”

Cost of a Soul releases in select theaters May 20.