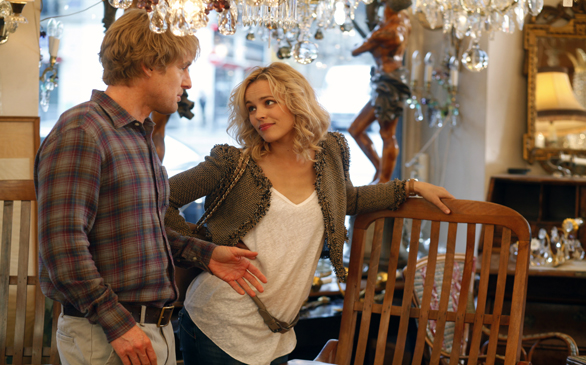 Owen Wilson as Gil and Rachel McAdams as Inez in Midnight in Paris
(Credit: Roger Arpajou )

When he signed on to play Paul, a dashing yet pompously intelligent art history buff, in Woody Allen’s Midnight in Paris, Michael Sheen received pages of the script covering only his scenes with stars Owen Wilson and Rachel McAdams. The British actor didn’t learn of the film’s charming plot developments until he bumped into Marion Cotillard in New York right before shooting started. It was then that she informed him of her own role in the film and what the story actually entailed. He also didn’t realize what (or whom) his character would be involved with until after production had wrapped. The revelation made his experience on the movie all the more enchanting and sweeter.

Such surprises (along with several scene-stealing cameos) pop up in the legendary director’s most recent film, billed as a valentine to the City of Lights. Wilson plays Gil, a novelist who accompanies his fiancée Inez (McAdams) on a trip to the French capital to spend time with her family. With the hope of being creatively stimulated by his foreign surroundings, Gil begins to take midnight walks throughout the streets of the city and stumbles upon something – for lack of a better description that may risk spoiling the rest of the film – magical.

Experiencing the magic of Paris was something the former Mean Girl immediately welcomed with open arms when she started shooting on location.

“I think people really take time to enjoy life there,” McAdams tells me while we take in our plush surroundings at the Four Seasons in Beverly Hills. “There’s this kind of quality of just enjoying life for what it is and not letting it pass you by.”

Reteaming with her Wedding Crashers costar, McAdams felt totally at ease working with Wilson again. However, it was challenging to play a character who didn’t get lost in that aforementioned magic.

“She was outrageous at times and could be quite extreme. I liked her practicality. I liked that she didn’t pretend to be swept away, and she was quite honest about that.”

Another challenge, especially during her scenes with Wilson, was not playing the object of desire.

“I was happy to play into it,” she continues. “I was the cat, and he was the mouse; I would always have my hand, my paw, on his tail and never let him go too far away from me, and then Woody totally saw it differently and said, ‘Stop fondling him! You’re always touching him!’”

Enter Sheen as Paul, Inez’s college crush who makes an appearance in town, creates some ripples in the engaged couple’s relationship and attempts to show them a good time at some of the city’s famous museums. Both McAdams and Sheen consider working on an Allen film one of the greatest opportunities of their careers.

“One of the things I found really fascinating about working with Woody was that he’s a sort of un-modern filmmaker in terms of the way he works with actors,” Sheen says. “The modern idea is that you play subtext, and it’s what’s going on under the surface that is of interest in the scene. And Woody is anti-subtext … He doesn’t want anything going on under the scene. He just wants you to play the surface of the scene as much as you can to the point where he wants you to improvise constantly. He encourages you, I think, to allow the story to do the work so the story reveals the story rather than the actor revealing the story.”

McAdams enjoyed the freedom she was given as an actor on set. After all, allowing actors to breathe and use the space they’re in is something Allen is known for and what many critics and fans attribute to his success. He’s also known for his idiosyncratic approach to actors when trying to get them on board.

McAdams remembers, “He almost tried to talk me out of it … I was very confused. We had a meeting in New York, and he said, ‘I really would like you to play this part, but if you don’t want to do it, that’s fine, and we’ll do something else.’ I was like, ‘No, no, no! I want to do it!’ It was very endearing, and I was flattered.”

Another actor the director managed to cast in the film was France’s First Lady, Carla Bruni. The international scrutiny surrounding her involvement in the film was never noticed or felt on the relaxed set. For Sheen, it was one of the high points of his experience on the movie.

“We had great wide-ranging conversations,” he recalls fondly.

In fact, the entire movie was an amazing experience. When asked if there was one thing he learned from working on a Woody Allen film, Sheen uses the simple, universal lesson Wilson’s character learns after his late-night run-ins with several famous faces: “Enjoy life.”

Midnight in Paris releases in select theaters May 20.