Pirates of the Caribbean: On Stranger Tides: The Power of Depp 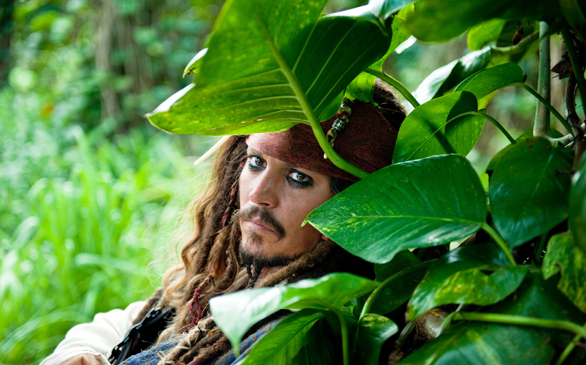 Captain Jack (Johnny Depp) makes his way through thick jungle in search of the Fountain of Youth.
(Credit: Peter Mountain)

Shiver me timbers; Captain Jack Sparrow is back on the high seas in Pirates of the Caribbean: On Stranger Tides, the fourth film in the wildly successful Pirates movie franchise. This time around, Sparrow (Johnny Depp, as if you didn’t already know) finds he’s been shanghaied, awakening aboard the ship of legendarily formidable pirate Blackbeard (“Deadwood” star Ian McShane, for once keeping his potty mouth clean), as he’s taken on a wild quest for the Fountain of Youth after crossing swords with a woman from his past (the unspeakably beautiful but noticeably pregnant Penélope Cruz).

While Depp has made a career by creating odd yet winning characters like Edward Scissorhands or Ed Wood, by stealing elements from Pepé Le Pew, Keith Richards and Groucho Marx, the 47-year-old thespian cultivated a character who has become iconic and – in large part thanks to the magic of Sparrow – sailed the series to over $6 billion dollars in worldwide receipts. It’s an impressive feat alone, but when you consider the fact that the films were inspired by a ride at Disneyland, it seems laughable in theory. Can you imagine Splash Mountain: The Movie or Tea Cups: Part Deux? Maybe not, but attach Depp and suddenly the concept has a certain ring to it.

Settling into a standing-room only press conference in a ballroom at the Montage Hotel in Beverly Hills, Depp, wearing blue-tinted Lennon glasses and a gray porkpie hat, smiles when the subject of the film’s source material is raised.

“It’s psychedelic actually,” he begins, going on to reveal that seeing the addition of his character to the theme park ride is bizarre but fills him with tremendous pride, adding, “It’s an honor. Something you took part in creating becomes this forever object.”

For a man who once declared “none of my movies will ever make any money,” Pirates’ success – which has been so profound, Depp is now the proud owner of his own private Bahamian island – is still almost unfathomable.

“It’s not my fault,” he jokes. “I did my best [to fail], even to the point of trying to get fired on the first [movie], but they couldn’t bring themselves to do it. It’s interesting to experience this ride after building a career on 20 years of failures and then something clicks. The funny thing is, I didn’t change anything. The fact that people want to see a movie I’m in is the most shocking thing ever.”

As beloved as Captain Jack Sparrow has become for audiences, the actor feels that same affection for his creation, saying he finds the wily pirate a difficult skin to shed once filming is wrapped.

“Every character you play, parts of you go into making that stew. Fortunately or unfortunately, there’s a part of [Jack] who shows up at odd times. He showed up this morning, in fact, when I was getting my kids ready for school, and I had to shoo him away.”

Along for the ride in On Stranger Tides is Cruz, who previously co-starred with Depp in Ted Demme’s 2001 flick, Blow. Over the past decade, the pair stayed close friends, making their on-screen reunion effortless.

“It felt like we’d wrapped Blow a week before,” Depp beams. “It clicked instantly. Whatever exists in chemistry was instantly firing on all cylinders.”

Just as the fourth installment arrives in theaters, people are already wondering, will Depp be back for another Pirates film? At first he jokes, “Yeah, they could wheel me in and my dreads could get caught in my wheelchair,” before adding with sincerity, “With Captain Jack, the possibilities are endless. There’s any possibility of madness and absurdity. With this character, you feel like you’re never done.”

But when pressed for more specifics, he coyly stays mum on the subject, drolly suggesting, “there’s a very clever idea about [Pirates] 5 and 6; we’ll actually shoot them on the ride at Disneyland in nonstop circles. It’ll be like Warhol’s Sleep, just close-ups on everyone.”

What he doesn’t seem to realize is, if Captain Jack Sparrow’s there, audiences will still probably buy tickets. Such is the Power of Depp.

Pirates of the Caribbean: On Stranger Tides releases in theaters May 20.