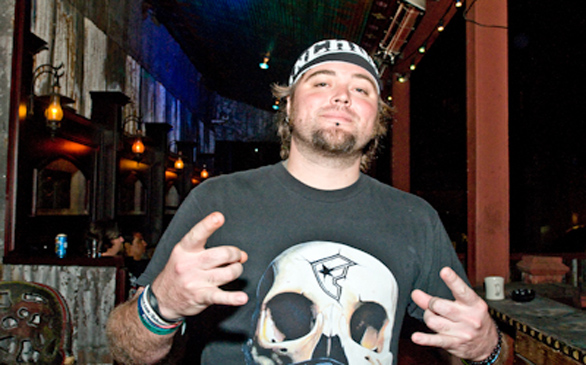 The House of Blues was in rare form, filled with people of every age and background there to see the lineup. Gearing up for the second night of the Uranium Tour, the House of Blues was taken over by die-hard Black Label Society fans. Many people in the crowd had already seen at least one of the bands playing in the past, and most of them were not out for their first night with Black Label Society. Opening the night perfectly were Anchored, Hourcast and All that Remains.

Anchored, hailing from Dallas, Texas are quickly making a name for themselves across the country. The band – made up of vocalist Brandan Narrell, guitarists B.G. Simpson Joel Estes, Josh Franklin on bass and drummer Matty Clark – got the audience energized early on.

In a tribute to the week’s news and the troops, the band offered up a well-received AC/DC cover. The atmosphere, while still early in the night, was charged with excitement and tension from the crowd. I have no doubt that Anchored left with more than just a few new and very loyal fans.

Continuing their tour into the summer, the band will be traveling across the country in support of Black Label Society. This fall, their behind-the-scenes DVD will be released with footage of the guys on the road, writing and playing their upcoming album. Early in 2012, their second CD will be released, with a tour in support of the new album. If you missed them on this night out in Los Angeles, do not make the same mistake when they are back in town later this year.