The Raveonettes: May 6 @ The Troubadour 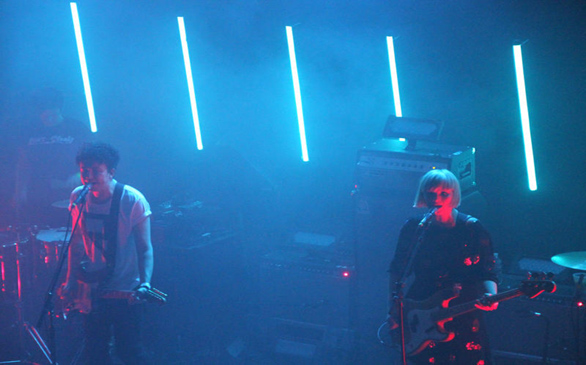 A sold-out show … Oh, “L.A. and all her crazy charms” as the lyrics of the song “Ode to LA” by the noisy indie pop rock duo, the Raveonettes played at the Troubadour. They took over the stage with their electric guitars and two drum sets on each side, which helped give them their boisterous and endearing sound.

The semi surf-rock voices from lead singers, Sune Wagner and Sharin Foo, juxtaposed well with the blaring hard guitars. The lights gave this band an eerie and mystical presence with harsh blues and pinks, while during the explosive guitar solos, flashing white lights were prevalent.

Together, the band made their tracks stirring with tense noise and soothing vocals. Their lively performance remained constant throughout as the band members had this calm, cool and collected persona. The encore knocked the crowd wild as fans grooved to their hypnotizing set.

On this tour, they were celebrating the release of their new album, Raven in the Grave. With more gloomy and dark tracks than before, a few parts of the set were a bit dreary.

The duo did seem to work harmoniously with one another giving the crowd the energy and appearance they longed to see. The band kept their electric noises and soft melodies continual, making the stage in Los Angeles into a “place where it’s fun.”