The Parlotones: Set Their Sights on the U.S. 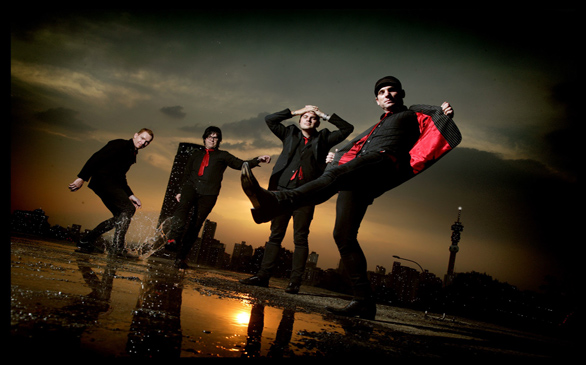 The Parlotones met when all of the members were attending school in the suburbs of Johannesburg, South Africa. The band consists of guitarists Glenn and Paul Hodgson, along with Kahn Morbee who is the lead singer as well as Neil Pauw as the drummer.

Kahn shares, “We all grew up in the same suburb of Johannesburg and attended the same primary and high school, two of the members are brothers and the rest of us met through mutual friends. We were lucky to have been in the same headspace in terms of tastes in music, and when we started we were all novice musicians so we grew organically at a similar pace.”

Having released several albums with numerous awards thus far has made them the biggest rock band in South Africa. Now, they return to the states for a rope of dates, including a stop at the Troubadour on May 31, and will be releasing a live CD/DVD, Live Design, June 21. They will also be performing a 3-D concert called Dragonflies and Astronauts on July 16 that will be broadcast throughout the world.

“We’ve always had high ideals, and we hope to achieve relevance and success on a global level. We want to be doing this as a career for the rest of our lives, as the four members who founded the band. Along the way, we hope to bring some form of enjoyment to our fans and perhaps inspire future generations of musicians,” adds Kahn.

The Parlotones’ unique sensibility of the music business has made them the successful rock band that they are today which will give them an upper-hand as they strive to gain a broader audience in the United States.

“We all juggled academics, then work while doing the band so we got a sense of how the business world works. Along with our manager (our fifth member), we’ve had to adopt an entrepreneurial attitude because since our inception we’ve been told the hurdles of being in a successful rock band were too big, first within our own borders and then outside our borders,” says Kahn. “We’ve achieved things people thought were never possible by being entrepreneurial. We weren't going to sit around waiting for a label or promoter to shape our careers, we had to do it ourselves, and that meant being business savvy. We’ve made mistakes, but we’ve also learned a lot and we’ve always had an indie ethos of we can’t wait for opportunity – we have to create it ourselves.”

Their involvement with Earth Hour and Live Earth will certainly help them because focus on the environment now is more evident than ever before. Kahn is passionate in describing the band’s concerns about the welfare of the planet.

“Global warming and the disregard for defenseless animals, two in particular are very close to home – the rhino and great white shark – [are] very much an identifying characteristic of what makes up South Africa, and both species are pretty much on the verge of extinction due to mankind’s overriding greed at the expense of others. It saddens me to know that in the not so distant future both species will not be seen in their natural habitat. I always say we could easily cure the world’s problems if we could find a cure for greed,” he says. “If we can find a cure for greed, we’ll cure all our problems. The planet does not belong to us, we are merely custodians and not very good ones either, we label ourselves the ‘intelligent’ species, but we’re doing some very dumb things. The only solution is to enact a paradigm shift within society, only when society rejects the elements that are detrimental to themselves and to others will corporates and governments stop producing them. I guess it’s kind of like a ripple effect.”

The music of the Parlotones appeals to many because of their melodic style. When Kahn is asked about how it feels to be compared bands like the Police he says, “That’s a massive compliment, they were an amazing band and Sting continues to be brilliant. If we have an iota of their success we’ll be delighted.”

Biffy Clyro, Mumford & Sons, Band of Horses, Decemberists, Young the Giant, Band of Horses, Bright Eyes, R.E.M. are some of the bands that they are listening to now ... but that roster fluctuates.

Some of their biggest accomplishments include playing for a massive audience of 20,000 in South Africa and playing after Metallica for the Coke Fest.

“It was terrifying and amazing, we’re big fans and we got to watch them from the side of stage each night command an audience and dominate a stage. We learned a lot about what so many years of [being in] performing looks like,” says Kahn. “They’re a great band and we had to play after them, sheesh. Now, that was terrifying. It was in the early stage of our career and we were pretty much crowd control, an attempt to keep a percentage of the crowd back so that everyone wouldn’t leave at the same time. We played two shows after them; the third one, we drove 14 hours and they went over the city curfew and we couldn’t play. At that stage, we were juggling day jobs with music and had to drive 14 hours back to make [it to] work the next day. It was bleak, but we were grateful for the experience. We also got an enormous amount of press because we were the suckers that had to play after one of the biggest bands in the world and then of course never got to play the last show; we got more press than the event itself because of it. We now ‘tongue in cheek’ tell people that Metallica opened for us.”

The band will be releasing an acoustic album called Eavesdropping on the Songs of Whales, but it will only be available in Europe first.

“We’re happy and excited about the possibilities because the small successes have come a lot quicker than any other territory we’ve toured including our own, and we’ve achieved some great results in other places. We’re not expecting overnight success, in fact we’d prefer an organic process that builds a loyal fan base and allows for longevity. For us, the mere fact that we’re touring America and winning fans over is a success in itself, something that almost no South African acts get a chance to do,” Kahn says about the burning anticipation of touring this year and about their prior success here in the United States.

The Parlotones perform May 31 at the Troubadour. For more information, visit the-parlotones.com.