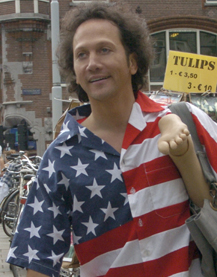 In Deuce Bigalow: European Gigolo, comedian Rob Schneider reprises his titular role to help his friend and former pimp T.J. Hicks (Eddie Griffin) beat the rap for a string of gigolo murders in Europe. In this sequel to the 1999 original, Schneider’s Deuce hooks up with a Dutch hottie (Hanna Verboom) while trying to infiltrate the ranks of a secret society of the "most gifted" man-whores on the planet.

According to Schneider, the sweetest part of his job as America’s gigolo is that actor-comedian John Cleese paid him a nice big compliment for it.

"John Cleese said to me that the first one was brilliant and I was psyched about that," says Schneider. "If Roger Ebert had liked a thousand of my movies, it doesn’t mean anything to me as much as John Cleese [liking one film] because he’s one of my heroes."

Cleese aside, though, the real question here is whether Deuce Bigalow: Male Gigolo even needed a sequel – and this observation is not lost on Schneider in the least. As the actor maintains, the making of European Gigolo was really the product of his 2002 flick The Hot Chick, which wasn’t very successful.

"I remember it was Dec. 15, 2002, right after The Hot Chick didn’t open well. So I said, ‘Let’s get writing,’" recalls Schneider. "It was tough because people really liked the first one. It was a nice little movie and it wasn’t built for a sequel. And so we said, ‘If we’re going to have [another one], let’s kill it! Let’s just go for it and approach it like it’s a whole other animal.’"

Unlike the original, European Gigolo is set along the canals of Amsterdam, making it the first American film shot entirely on location there (last year’s Ocean’s 12 only shot there for a few weeks). "I thought this time it would be more fun if [Deuce] had to compete against these European, world-class gigolos," says Schneider.

According to the actor, though, the setting wasn’t the only thing that was important for European Gigolo – it was also his chance to regain his footing in the ever-changing landscape of Hollywood.

"You know, it’s funny, but after The Hot Chick my career’s been in the toilet there for a while. I just couldn’t get anything going. I mean, Disney didn’t want to make this movie, and thank God Sony jumped on it," says the actor and former "Saturday Night Live" regular. "It’s tough, you know, just the ups and downs. It’s funny, every time you think you make a really good movie, if the people don’t come out, well, you’re only as good as your last movie."

In spite of his misfortune, Schneider contends that the "SNL" gods were waiting in the wings. "I was lucky that Adam Sandler and I were partners and that we were able to make pictures that we think are really funny without getting them ruined, frankly," says Schneider. "I want to make some smaller pictures, more for adults. That’s why I wrote [European Gigolo] Rated R because there’s not a lot of adult movies. It’s so skewed … This was like, you know what? Let’s just go for it. If little kids sneak in, they just sneak in."

While the theater version of the film contains a lot of eyebrow-raising scenarios and characters, Schneider reveals that there’s even more for the DVD – and some things were even saved specifically for the special features section.

"The DVD’s going to have some grosser stuff, definitely. You never know how far you can go with an audience," admits Schneider. "All you can do is trust your instincts. Honestly, in the first screening we showed it and the audience wanted to see it but when we showed it they were like, ‘No, no, we didn’t want to see that. We take it back – we really didn’t need to see that,’" he jokes.

With that in mind, Schneider holds no reservations about how he thinks the final version of his new film will be perceived in theaters.

"It’s amazing to me [the number of] people who saw it on DVD," he concludes. "I wish they’d saw it in the movie theater. My career would’ve been a lot better off."