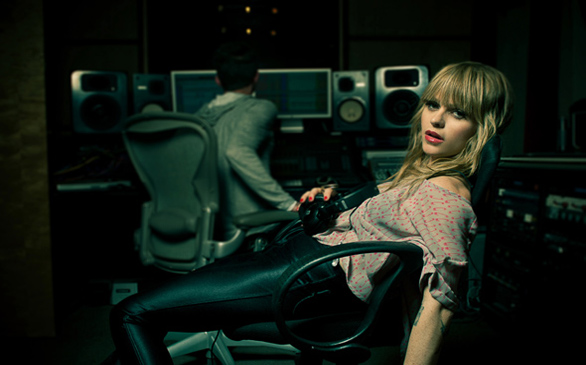 Taryn Manning Turns it Up

Taryn Manning is running full-speed ahead with her new single “Turn it Up,” a vivacious electro-pop track that marks the musician’s solo debut. Manning is a former member of Boomkat, the L.A. act that had a couple hits on the dance charts not too long ago, but you might also know her name from her other endeavors: Manning DJs regularly in the area, and she has also had guest starring roles in films like 8 Mile and Hustle & Flow as well as on TV shows “Hawaii Five-O” and “Sons of Anarchy.”

“After doing it all, I am ecstatic to return to music which is my first passion, my first love really,” says Manning. “Music has a way of creating this unparalleled energy in me, and I can’t wait for my fans to hear my new song and have them dance to it.”

“Turn it Up” is available now, and Manning will showcase the tune when she plays the House of Blues Sunset Strip May 19.

UCLA Gets $10M For Music Center

Mo Ostin, the former CEO of Warner Bros. Records and the company’s current chairman emeritus, has announced that his Ostin Family Foundation has given UCLA 10 million dollars to be used to build a state of the art music campus to be called the Evelyn and Mo Ostin Music Center. Ostin, who earned a degree in economics at UCLA, has worked with an amazing array of stars during his long career including Fleetwood Mac, Jimi Hendrix, Frank Sinatra, Green Day, Madonna, Prince, R.E.M. and the Red Hot Chili Peppers. Groundbreaking is schedule for early 2012, and the center should be ready for students sometime in 2014.

The Best of Teena Marie

The late L.A. “ivory queen of soul,” Teena Marie, has been honored by Legacy Records with a new addition to their Playlist series, The Very Best of Teena Marie. The compilation includes big hits like “Lovergirl” and “Ooo La La La” amongst its 14 tracks, but the idea behind the Playlist titles is to include stand-out deep album tracks as well; to that end, you’ll hear cuts like “The Once and Future Dream,” Teena’s nearly eight-minute long duet with mentor Rick James.

Purchasers can also unlock additional online content like photos and a companion digital booklet with liner notes. Marie died of natural causes in December of 2010.

Joe “Shithead” Keithley has compiled an illustrated history of his infamous punk band D.O.A. called Talk-Action=0. The full-color, large-format book is comprised of vintage photos and posters, handwritten lyrics and other ephemera that offer a glimpse into the hardcore life of one of the hardest working punk bands in the business. The book releases in early June, just in time for D.O.A.’s mini-tour of the west coast that includes stops at Alex’s Bar in Long Beach June 17 and at the Glass House in Pomona on the 18th.

Ronnie Vannucci, drummer for the Killers, has formed a new band called Big Talk. The band’s self-titled debut will drop on the Epitaph label on July 19; first single “Getaways” is available now.

They broke up about a year ago but L.A. experimental metal band ISIS is about to release a posthumous series of live concert recordings, beginning with ISIS Live I on May 31. Additional titles will drop every two weeks culminating with ISIS Live V, a 2006 show recorded at Koko’s in London, available July 26. All titles are digital only.

L.A.-based hip-hop duo Self Scientific has released an EP called Trials of the Blackhearted that you can download for free at imadeitinc.com.

The new one from One AM Radio is called Heaven is Attached by a Slender Thread; One AM Radio plays the Echo on May 21.

She Wants Revenge release Valleyheart on May 23; the band plays the Roxy the same night.

The Gromble has begun a residency at La Cave in Costa Mesa; catch the underground pop band there every Tuesday night or at the Anaheim House of Blues June 18.

Eve 6 has signed with Fearless Records and is heading into the studio in June; expect their fourth studio album later this year.