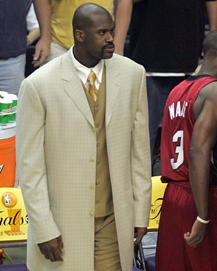 Look out NBA, Shaq just got his MBA. Does this mean the celeb may eventually trade his jersey and basketball for a business suit and briefcase? Indeed, it does. To kick off the summer, instead of running across the court, Shaquille O’Neal walked across the stage at the University of Phoenix to receive his master’s degree in business administration.

Although more than 2,000 students picked up diplomas along with the NBA all-star June 25, Shaq may have been the only celebrity sporting a cap and gown. It’s no secret that graduating college is a rare accomplishment in Hollywood, leaving O’Neal as one of the only students crossing the stage with enough star power to create a media frenzy. Paris Hilton doesn’t seem to have plans to enroll. And even though Michael Jackson has some extra free time now that his newest court case is settled, it’s highly unlikely the King of Pop will be requesting an application anytime soon.

But Shaq is different. Being drafted to the NBA may have been his first claim to fame, however, his plans for the future include much more than just basketball.

"Sports for me has always been, you know, fairy tale life – and this right here is real life," Shaq told CBS after his graduation. "This right here means more."

Of course, in reality, education doesn’t come with the glitz and glamour of Hollywood fairy tales, but a college diploma holds a status almost as elite as an NBA Championship trophy. In 2003, according to the National Institute of Education Statistics, more than 70 percent of adults did not have a bachelor’s degree. In 2004, only five percent of 200,000 people surveyed by the United States Census Bureau had a master’s degree. Less than 1 percent of that same sample group earned an income over $250,000, so it looks like "Big Bank Accounts" is an elite club, too.

This makes Shaq one of the few people on Earth who did what it takes to have it all. And back in 1992, he promised his mother this would happen.

Despite his choice to leave Louisiana State University during his junior year to play pro basketball, less than a decade later, in 2000, Shaq left LSU again. But this time, with a bachelor’s degree in business. Five years later, this modern day basketball legend is fully equipped with a master’s degree as well.

Anyone who’s seen MTV’s hit show "Cribs" knows Shaq has a Ferrari, Hummer SUV and a showroom full of "about 15" other lavish cars – cars the average college student could only dream about driving to school. But although Shaq is known for showing off his Superman status (he even had the Superman logo embroidered into the quilt that covers what he claims to be one of the world’s biggest beds), he did not waste time flaunting his ego in front of the college crowd. Instead of hopping in his Mercedes S-Class or having chauffeurs and bodyguards escort him to class in one of his Chevy Suburban limos, Shaq stayed home. Taking advantage of a master’s program offered by the University of Phoenix, Shaq discovered the perfect education solution for the working adult with limited free time – online classes.

Taking college classes at home is one of the best ways for celebrities to maintain the privacy and flexibility needed for their high-profile schedules. Shaq, on the other hand, decided to find time to attend one of University of Phoenix’s West Los Angeles campuses before he was traded from the L.A. Lakers to the Miami Heat. He may have had more fans on the court than he did in the classroom, however, the basketball star simply smiled and joked about people who made considerably rude comments like, "You’re not as smart as we thought you’d be."

Unless it’s the paparazzi, Shaq has never really been one to shy away from a crowd – even when it’s a crowd in a low-income community. In fact, the millionaire has taken time out to give a few children from South Central Los Angeles a sneak peak into "The Fabulous Life of: Celebrity Kids" by donating Christmas gifts to families who cannot afford life’s luxuries like tickets to Lakers games and stockings stuffed with presents. But Shaq didn’t give away just any old gifts. In traditional celebrity splendor, Santa Shaq came to the neighborhood with a sack full of top-notch toys with hefty price tags. And the big 7-foot-1 guy with a big heart showed up to help personally hand out PlayStation gaming systems, mountain bikes and all the other holiday goodies he brought to lift the kids spirits.

When it comes to Shaq’s spirit, it appears to be strong, hardworking and showing no signs of growing weak anytime soon. Not only is his stamina like Superman’s, he’s also reminiscent of a modern day renaissance man.

Now that he’s conquered basketball and business school, Superman is ready to fight crime. Think he’s bluffing? Think again. We’re talking about a guy who’s already completed a few police academy courses and, based on his employment history, you can almost guarantee that when Shaq says he has big dreams of becoming a sheriff, he means it.

But all that work wouldn’t be any fun without a little play on the side – and the perfect side job for a famous athlete is nothing other than a gig in the entertainment industry. During off-season, lights, cameras and action always seem to come knocking on Shaq’s door. If the price is right, why not let a few advertisers and movie producers in? It doesn’t matter if he’s striking a pose for an endorsement or reviewing a script for the big screen, Shaq is never quick to run from a challenge. He was a genie in a bottle in the 1996 film Kazaam and also flexed his acting skills in other films such as 2001’s Freddy Got Fingered and television shows like HBO’s "Curb Your Enthusiasm." He even dared to enter the rocky waters of the music industry – no, the CDs didn’t do too well on the billboard charts , but Shaq is still proud to call himself a rapper.

Shaq’s plans have only become bigger and better since the day he first left LSU and stepped onto an NBA court. Now, with two business degrees in hand, a criminal justice degree in the works and a doctorate degree on the way, Shaq has only one thing to say: "… Pretty soon you will address me as Dr. O’Neal – and Dr. O’Neal only."