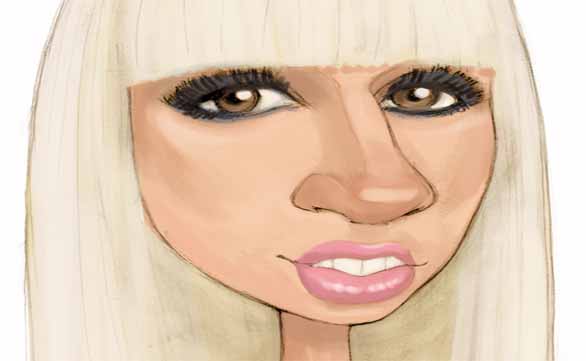 Lady Gaga is the perfect vessel for a broad message of unity, defiant self-respect and personal liberty, themes that the pop star returns to over and over again on "Born This Way," her new album that comes out Monday. The artist born Stefani Germanotta is writing music for the People of the World, so her message needs to be clear as she stands perched upon the massive, gaudily ornate platform she and her collaborators have constructed for this moment.

But the inclusiveness Gaga believes so strongly in apparently doesn't extend to music fans interested in sonic open space, unfiltered vocals and surprising rhythms, bridges and hooks. She's speaking to everyone, it seems, except fans of artistic innovation. Say what you want about Lady Gaga, but nuance is not one of her strong points, nor is musical adventure. She's unsubtle in her message, unsubtle in her dress, and, most important, unsubtle aesthetically.

"Born This Way" is Gaga's second proper full-length work (excluding her eight-song EP of 2009, "The Fame Monster"). Two years in the making, the album's 14 songs can be divided into two categories: the dance floor bangers and the bedroom breathers. The former, of which there are a dozen, tend to merge into one mass of pounding after about a few songs, drawing as they do from the worst tendencies of the last decade of dance music one in which every peak is telegraphed from a mile away and which every valley is ruined by the impending arrival of another obnoxious return to a sledgehammer beat.

There are interesting moments. The bridge on "Judas," when Gaga steps back and allows producer RedOne to wave his freak-flag with bleep-and-burp digital effects and futuristic washes for a too-quick breakdown, is wild and inventive. But then the 132 beats-per-minute pound comes in, and dynamism is once again merged by synthesizer bursts, cheesy saxophone riffs, guitar solos, or, at times, even Gaga's voice into one muddy mess in the middle of the track.

Some parts sound like dumbed down Daft Punk, and those that don't could have been swiped from a Basement Jaxx track from 1999. The main difference though, is that most of "Born This Way" is not funky. Whereas a dance group like the Scissor Sisters or Hercules and Love Affair makes loud-and-proud anthems that manage to stretch both musically and thematically, Gaga preaches messages of nonconformity while relying on a producer, Fernando Garibay, whose credits include tracks for Paris Hilton, Ashlee Simpson, the Corrs, and Snoop and will.i.am ("The Donque Song").

Above this music Gaga addresses freedom in its many forms. She celebrates her follicles in "Hair" -"I am my hair. I am free as my hair" -and, in "Americano" sexual and cultural openness, a song about meeting an immigrant woman in East L.A. and falling in love. The track is sweet and sharply composed, but the Latin flairs are so stereotypical _ the flamenco guitar strum and the mariachi horns (at least what you can hear of them) that it borders on self-parody.

There are exceptions: "Government Hooker" is, in fact, funky, and draws its sound from a palette that references Kraftwerk, post-disco and weird Casio-tone circuit-bending. The last two minutes of "The Queen," a bonus track on the deluxe edition, slows it down, employs a new beat pattern, ditches the hard bass-kick and travels to a more nuanced place.

And the best song on the album, the Robert "Mutt" Lange-produced "You and I," is a gorgeous love song that stands a good chance of being an "American Idol" staple for years to come. "Muscle cars drove a truck right though my heart," she sings, and even if the image is awkward if broken down to its parts _ is a Trans-Am sitting in the driver's seat of an eighteen-wheeler? _ it's a good line, one of a handful on "Born This Way."

But after such an extensive rollout, a few clever lines and a choice hook, drum fill, vocal run isn't nearly enough. If Gaga had only spent as much time on pushing musical boundaries as she has social ones, "Born This Way" would have been a lot more successful.

Visit the Los Angeles Times on the Internet at http://www.latimes.com/.