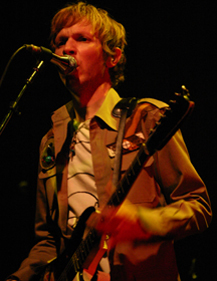 Sweaty and exhausted, the question I asked myself as I climbed the steps out of Gibson Amphitheatre into the cool Los Angeles night was, "What is there not to like about Beck Hanson?" This multitalented artist blew the crowd away with a performance spanning all of his records and slaloming through more genres than many record stores contain. Starting the night off with the infectiously danceable "Black Tamborine" off of his latest album, Guero, Beck immediately set the show’s tone.

The show itself felt less like a standard concert and more like a big party at Beck’s house. He played the part of the most popular kid in school, whose talent seems to be limitless, and we audience members played the part of the second year students who look up to him – yelling out to him to recreate tricks or imitations from parties past.

His set-list was at once carefully planned and spontaneous. The band transitioned from one song into another so smoothly that it took a moment to realize a new song had begun, creating an entirely new remix from the fusion of two consecutive songs. Thus the folky twang of some older tracks found their way into the electronic bass-driven songs of more recent releases.

About 40 minutes into his set, Beck put down his electric guitar and, standing on the monitors, deftly rapped in the way that only he can get away with. He then picked up an acoustic guitar and treated the audience to nearly a full set of his own music, which stood in stark contrast to the electronic deluge just unleashed upon the crowd. He treated us to renditions of his hit "Lost Cause" off of his sorrowful Sea Change; a song so simple in its structure that it’s easy to overlook the beautiful craftsmanship that went into this tune about letting go of a love beyond saving.

Of special interest was Beck’s rendition of "Everybody’s Gotta Learn Sometime," a song that feels like it’s never quite in key, but is pleasing to the ear and soul – like ambrosia from an acoustic guitar. The song, which rolls over the end credits of the artistically exploratory Eternal Sunshine of the Spotless Mind, seemed almost out of place without the images of Joel and Clem running across a snowy beach on infinite repeat, fading to black.

Continuing to promote the feeling of a giant party instead of a show attendees paid to attend, Beck even indulged in asking the crowd: "What do you want to hear?" A smile crossed his lips as he listened hard to the front rows yelling song titles out at him. He played a few of these requests on the spot, to the great cheers of the audience, laughing, "You guys right here are running the whole show."

As Beck strummed his hollowed-out instrument, his band took a short siesta, sitting down at a table on stage, complete with food and glasses of wine. They relaxed and did everything they could to pretend they weren’t still sitting in front of a few thousand people. They succeeded, and the performance art aspect of the show became even more pronounced as Beck became the solo rock star as his musicians made believe they were at dinner down the street from the venue. When they suddenly exploded out of the background for the second chorus, all members echoed "STOMP" in their percussive talents, the plates and utensils on the table becoming drums, the lips of their wine glasses morphing into Tibetan singing bowls, coloring in the lines of Beck’s final acoustic song.

Afterward, the band raced back to their instruments and treated the crowd to a few more songs, finishing up with the new album’s opener, "E-Pro."

For the last song, Beck invited anyone who cared to come up onstage and dance along with the band. The result was a moment in which every person in the amphitheater moved along with the music, jealous of those who had the cajones to step onstage and dance alongside the man himself. It was a moment that would have had the party shut down by the cops at any second for its loud, boisterous, spilling out into the street sort of feeling. The perfect end note to any good concert.