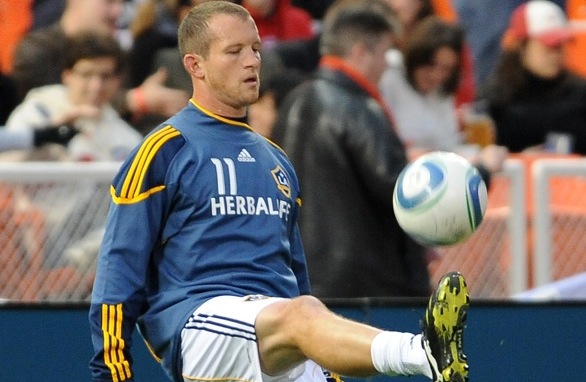 Chad Barrett scored the Galaxy's game-winning goal.
(Credit: Chuck Myers/MCT)
In their first SuperClasico meeting of the season, the Los Angeles Galaxy claimed a 1-0 victory over host Chivas USA Saturday night at the Home Depot Center before a sold-out crowd of 27,000. With the win, the Galaxy improved to 6-2-5, with 23 points. The record places Los Angeles atop of the Western Conference and is a league best.

Twenty-six minutes into the first half, forward Chad Barrett connected for this third goal of the year. After a well-chopped ball into the penalty area off a free-kick from English midfielder David Beckham, Barrett found himself alone in the air. He redirected the ball into the upper right corner of the net with a curling header.

“That has gone well this season,” Beckham says of his fifth set-piece assist. “We have players here who can get on the end of that kind of ball and give us a chance of scoring. We need to continue that.”

Beckham’s sixth assist of this campaign came at the right time since the score resulted in the eventual victory for the Galaxy.

“He has made a living at doing that,” Galaxy head coach Bruce Arena states of Beckham’s assists contributions. “We get a lot of chances and a lot of goals from David’s service on set pieces. It is a real positive for us.”

An exciting and fast-paced match from the beginning, the first of two SuperClasico games turned out to be what the fans expected and probably wanted. Several offensive sparks from both sides appeared, but in the end, the best squad on the pitch won.

American striker Landon Donovan did not score in the game, putting an end to his five-game goal-scoring streak.

The Galaxy put their four-game unbeaten-streak (2-0-2) on the line against the Houston Dynamo, hosting the Texas team Wednesday, May 25, at 7:30 p.m.