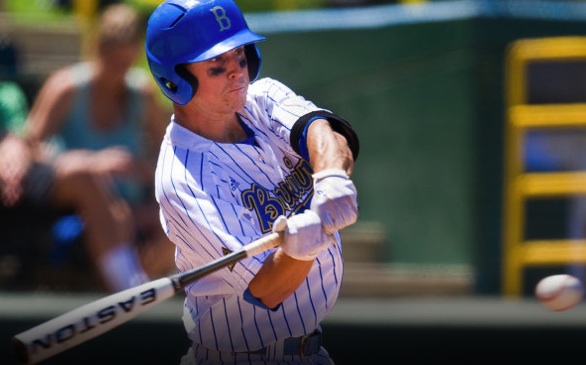 The UCLA Bruins are in a race for the Pac-10 title.
(Credit: uclabruins.com)
As the UCLA Bruins baseball team collected two wins over the visiting California Golden Bears, the USC Trojans surprised many in the Pac-10 by taking two-of-three games from No. 2-ranked Oregon State in Corvallis.

Friday’s game did not have positive results for the Trojans, who suffered a 7-2 defeat. However, the next two games proved different against the Beavers (38-14, 17-7).

In the series finale, the Trojans battled until the bottom of the ninth when Ben Mount took the mound. Mount’s two-inning save captured the victory for the Trojans.

Single runs in the second, fifth, sixth and ninth innings guided the Trojan scoring, which had four players record an RBI and runs.

The Trojans (22-29, 12-12) close out the season with four games at home, starting with Pepperdine and ending with a three-game set against the Washington State Cougars (24-26, 8-16) during the weekend.

With a chance to win the Pac-10 title, the Bruins did what they had to do: win as many conference games remaining as possible.

The Bruins’ strength all season long has been their starting pitching, which came to light yet again. Although Friday’s results were negative, Gerrit Cole limited the Golden Bears to one run and six hits through seven innings of work in the squad’s 4-0 loss.

Guiding the club to a pivotal 2-1 Saturday win, Trevor Bauer pitched his seventh consecutive complete game to lead UCLA. Bauer surrendered one run, five hits, one walk and struck out eight in his 11th win.

UCLA (31-20, 16-8) finishes this campaign with four contests on the road. They play at UC Irvine before traveling to Tempe to face the Arizona State Sun Devils (28-14, 16-8) for three over the weekend.