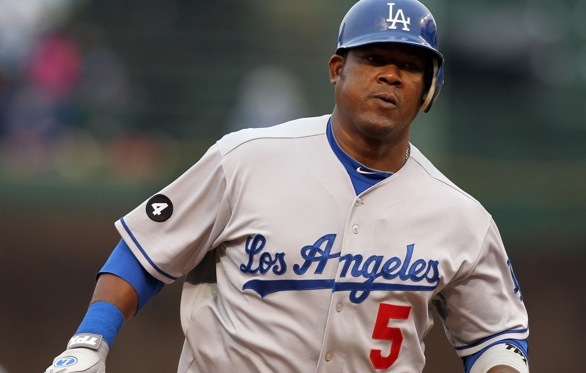 Juan Uribe is the latest Dodger to be added to the disabled list.
(Credit: Phil Velasquez/Chicago Tribune/MCT)

They’re dropping like flies out there, like bloop singles, every day another soldier wounded on the battlefield of Dodger baseball. At last count, seven opening day starters are currently on the disabled list. This past weekend alone saw three players exit the game with injuries: Andre Ethier (a bruised back); Juan Uribe (a strained abdominal muscle); and Rod Barajas (a sprained wrist on his catching arm). While Ethier and Barajas are listed day-to-day, the current wounded adds to a long list, including pitchers Jonathan Broxton, Blake Hawksworth, Vicente Padilla and Hong-Chi Kuo, infielders Aaron Miles and Casey Blake, left fielder Marcus Thames (out with a quad strain). Need I go on? Either this team has a hex over its head, is extremely unlucky or has a subconscious death wish – perhaps a combination of all three. One thing is certain, however, the Dodgers have rarely been in such a sorry state.

As the sinking ship struggles to stay out of last place, “owner” Frank McCourt is showing no sign of relinquishing his death grip on the team. On the contrary, he aims to go ahead with his plans to hand over 20 years worth of television rights to the Fox Network in exchange for the scrappy remains of his tattered soul … er … uh, three billion dollars over the course of that time. Oh, and by the way, the deal won’t start for another two years. In the meantime, Fox will loan him something like 300 million to cover payroll and his loan payments to themselves.

Now, I am no investment banker nor do I have any accounting skills much beyond depositing unemployment checks, but I know a stinker when I smell one. Remember back in ’04 when Fox loaned the McCourts the money to buy the team from themselves in the first place. The only constant here is Fox. Let’s face it, considering how deep in debt the team is to Fox, the Dodgers might as well still be owned by media tycoon Rupert Murdoch, a man who cares as much about baseball as his News Corp. cares for being “fair and balanced.” Oh, sorry, was that a dig? Murdoch came to exactly one game during the time News Corp. owned the team. I suppose he was too busy screwing over the country.

I’m beginning to lean toward the “Hex Theory” with regards to the recent spate of Dodger casualties on the ballfield. And while I may not be the best Juju doctor around, I would put good money (say, the whole unemployment check) that Fox is behind the evil spirits tripping up our boys out there, a curse so vile even Vladimir Shpunt can’t stop it. Ever since Fox entered into the equation, way back in the late ’90s, it has been a story of one dashed hope after another. We need a refresh button, something to send the squealing rodent back into the woods with its tail between its legs.

As to the near future of the team, all remains speculation. Will Commissioner Bud Selig have the chutzpah to yank the team out of McCourt’s hands for good? Will Superior Court Judge Scott Gordon simply order a sale of the team when the embattled divorcees meet again in court on June 22? Ah, things devoutly to be wished. But for now, all Dodger fans can do is wait and hope that the remaining roster is spared from this perfidious plague of injuries.

In such dark times, we would be wise to heed the words of famous old crooner and Dodger fan Bing Crosby with his “Accentuate the Positive.” So here goes: center fielder Matt Kemp is healthy and still hitting the ball; Blake is due to return to the lineup by week’s end; Uribe, though presently on the 15 day DL has stocked the highlight reels in recent weeks with a dozen dazzling defensive plays; Rafael (Fookie) Furcal is back from his thumb injury; James Loney’s bat has improved of late; and the Dodger bullpen, so dreadful during the first part of the season, has appeared to stabilize recently.

Let’s see … what else? The Dodgers are still in Los Angeles! There is still a place called Dodger Stadium, not News Corp. field, or Wal-Mart Park! However diminished by declining ticket sales and less-than-stellar play, the game goes on and an expectant crowd of believers still shows up and gives the old ballpark that strange magic.