311: Celebrates 15-Year Anniversary with Don’t Tread On Me 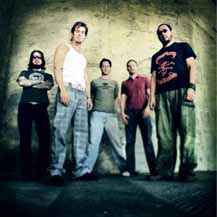 "How the hell did this happen?" is a phrase that has gone through S.A. Martinez’s mind, thinking back on how 311 has survived to celebrate 15 long years in an ever-changing music industry. "That’s a pretty good length of time," ponders the singer and scratch-master. "I mean, that’s a young teenager!"

In an age where musical trends are about as common as a student with an iPod, 311’s funky blend of rock, rap and reggae sounds sprinkled with a dose of uplifting lyrics has stood the test of time. In conjunction with their 15-year anniversary, the band released their eighth studio album, Don’t Tread On Me. The new album follows a trail of platinum albums and hit singles such as "All Mixed Up" from 1995’s self-titled "Blue" album to "Amber" from 2001’s From Chaos and last year’s chart topper "Love Song" from the 50 First Dates film soundtrack.

"I think we’re all on the same page and working toward the same thing," says Martinez on the cohesiveness of the band, which also includes singer/guitarist Nick Hexum, drummer Chad Sexton, guitarist Tim Mahoney and bassist P-Nut. And what has kept them grounded and inspired for so long? Martinez admits it’s the music and its affect on fans.

"It brings people together in a good way, a positive way," he explains, "and it makes a change in people’s lives. We don’t know it until we meet them, but [fans] tell you how much the music means to them. You just can’t put into words what that means to us. Keeping that alive is what’s most important. I don’t think anything can blind us from that."

Lyrics from songs such as "Speakeasy" off Don’t Tread On Me, for example, talk about the positive affect of speaking your mind and letting your feelings flow.

"Nice and easy and your breathing will be pleasing," read Martinez’s lyrics, which he says encourage listeners "to relax and breathe, because breath is life." Hexum completes the lyrics with, "Just speak easy and say what’s on your mind."

"People don’t let out what they need to let out," says Martinez, describing how bottled-up emotions can be destructive. "But it’s hard. It’s not easy. Anyone who’s been through therapy – my wife is a therapist so she knows how difficult it is – will tell you it’s not fun, but the results can be very rewarding. Myself, I was a big skeptic of therapy. I just thought it was something useless, but it’s not!"

These underlying sonic messages mixed with adrenaline-pumping music have kept 311 fans loyal. However, new tunes such as "Solar Flare" have taken the message to a political level, with Martinez rapping about world events and, as Hexum puts it, "how people use fear to stay in power."

"‘Solar Flare’ speaks on the issues of the day; the war and the unfortunate circumstances that we’re bombarded with. There’s so much deception going on in the world, a lot of big lies," reveals Martinez. "It’s got a rebelliousness to it that’s pretty infectious."

Hitting the road with Papa Roach and Unwritten Law for the first leg of their tour, 311 is prepared to continue to spread the good word. But after 15 years, does working together get easier or harder for this five-man crew?

"We go about it in a pretty even way," says Martinez with a smile. "Everything among us is an unspoken thing. We know when to take time off, we know when to get back to working on songs, and when to rehearse before we go on tour. It’s something that we don’t really have to work at that much, you know? It’s just kind of who we are."

Don’t Tread On Me is currently available. For more information, visit www.311.com.