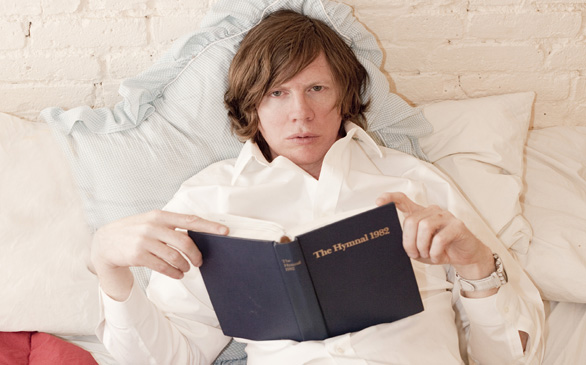 Longtime fans of Moore know that his solo work isn’t necessarily going to sound anything like the music he produced as a member of Sonic Youth. His last album, Solo Acoustic Volume 5, was a set of guitar instrumentals that put an experimental twist on the Leo Kottke sound. Now, here comes another curveball as Demolished Thoughts is produced by – wait for it – Beck!

Beck puts his stamp on “Circulation” where Moore expands on the Solo Acoustic sound, his delicate guitar work occasionally getting a little loud and manic, especially after being poked at by whooshes of insistent violin provided by Samara Lubelski. For the most part though, Beck isn’t on board to Beck-a-fy Moore’s work; he’s looking for quality sound, and he gets it.

The emphasis is on Moore’s lyric writing and singing on “Benediction” and “Illuminine,” but songs like “Blood Never Lies,” “Mina Loy” and “January” put the spotlight directly on Moore’s acoustic guitar work – a sound that is beautiful, breathtaking and mesmerizing. Clearly Moore has entered a different realm as a guitar player; the fact that Beck’s name is attached to this release just might get his music the recognition it deserves.