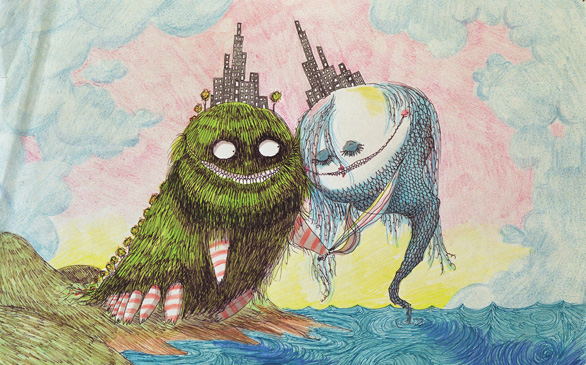 Corpse Bride, Edward Scissorhands, The Nightmare Before Christmas, Sleepy Hollow, Charlie and the Chocolate Factory and Alice in Wonderland – it’s definitely a shame if you haven’t watched at least one film created by the master of gothic animation. Director of 14 feature films, Timothy Walter Burton, better known as Tim Burton, is one of today’s most loved cultural icons. From the arts to films, Burton has created many notable works to date and is still continuing to do so. In celebration of Burton’s long and prolific career, the Los Angeles County Museum of Art dedicates an exhibit to the venerated artist from May 29 to the end of October.

Born in 1958 in Burbank, Calif., Burton was always interested in the arts. An introspective and artistically eccentric person, Burton began producing short films as early as 13 years old. Graduating from CalArts in 1979, Burton was scouted by Walt Disney Animation Studios after the success of his short film, Stalk of the Celery Monster.

That was only the beginning of his long expanding career, though, as his individual style of mashing pop culture, fairy tales and gothic tradition together produced queer yet beautiful pieces of work. He is the visionary who altered colorless Hollywood into a gathering of personalized and unique explosions. Burton is an artist who can produce art (in the broadest sense) that seems effortless and rough, but amazing at the same time. Don’t get me wrong, I said seems effortless because most of his works were in fact time consuming. If you don’t think so, check out how Corpse Bride was produced … you will be in for a huge surprise.

Burton lovers are definitely in for a treat when they visit the exhibit of the multi-dimensional artist’s career. Bringing together over 700 drawings, paintings, photographs, moving-image works, storyboards, puppets, concept artworks and much more, LACMA succeeds in spoiling its visitors with an impressive collection of works that are both reminiscent of Burton’s career high points, as well as works from little-known personal projects. With pieces from the artist’s own archives, studio archives and the private collections of Burton collaborators, LACMA does not fail to uphold its reputation as one of Los Angeles’ most resourceful and dedicated museums. The Burton shrine will be created at the new Resnick Exhibition Pavilion.

LACMA, located on Wilshire Boulevard, has many discounts- a definite plus to its already revered reputation as being one of L.A.’s finest museums. With its generous hours of operation, the museum invites a wide range of age groups. If you have never been to the Los Angeles County Museum of the Arts, you probably passed by it before, as it is really at the heart of the city. Recall those clustered lampposts on Wilshire Boulevard you passed by? Well, that’s LACMA all right.

Other than its numerous ongoing exhibitions, LACMA’s architecture is another aspect to enjoy. If you happen to drop by the museum at its later hours when the sky is dark, try wandering through the lit lampposts after soaking in its exhibits. They are the perfect closing to a romantic night of art.