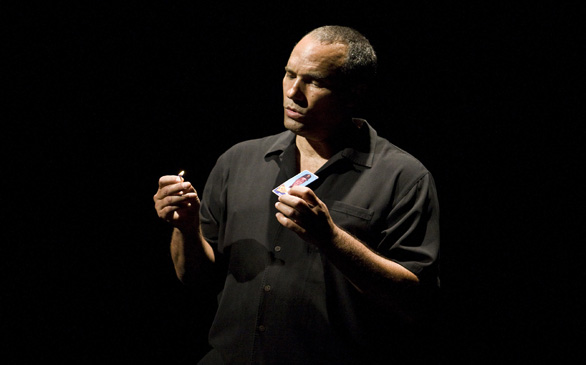 “Juan and John” was not what I expected it to be, starting with the title. My perverted mind was expecting a homosexual storyline of a love affair between two men. My assumption wasn’t that off. The storyline does involve two men, heterosexual men, two baseball players to be exact and a true story at that. The serendipity of this play and the way in which it was interwoven into the orator’s personal story was seamless and blew me away.

Creator and performer of all roles, Roger Guenveur Smith’s frenetic, schizophrenic delivery was awe inspiring and terrifying at the same time. In a barrage of words, movement, audio-visual presentation and scenic design we get a sense of history over the course of 50 years in the quasi-innocent context of a baseball game. What could be more innocent than a baseball game?

The play centers around the true story of baseball legends Juan Marichal and John Roseboro and the infamous 1965 day when Marichal turned and hit Roseboro in the head with his bat. From the start of the play, the poignant contemporary significance of this story hits a home run: Afghanistan, Vietnam, Korea, Arnold Schwarzenegger, the beating of a Giants fan into a coma at Dodger Stadium, Obama, al-Qaeda, politics, friends.

What I loved most about this experience was the message the audience leaves with at the end of the show: the power of forgiveness. Marichal and Roseboro were able to move past that confrontation and to develop a friendship that lasted a lifetime. There is a moment in the show where Smith, playing Marichal, is standing in front of his friend’s casket and acknowledges that one of the moments in his life he was most grateful for was being forgiven by Roseboro. Regardless of the depth of the wound between two antagonists, forgiveness is the greatest reward.