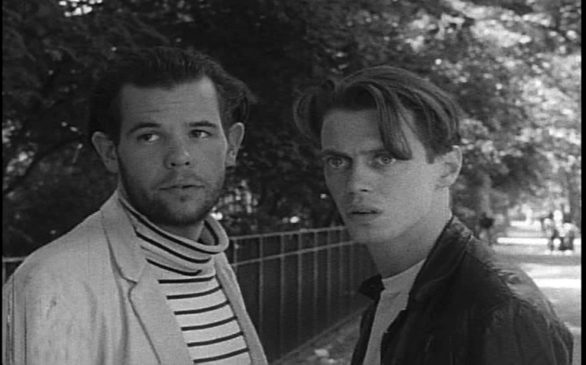 Mark Boone Junior & Steve Buscemi in Eric Mitchell’s The Way It Is.

It is hard to imagine that once upon a time Steve Buscemi could look at you with bright, well-rested eyes and New York City had reasonably sized, dirt-cheap apartments. Well, this is the world that Celine Danhier showcases in Blank City, a documentary that explores the bygone underground film culture of late 1970’s and early 1980’s downtown Manhattan.

This is not to say that it is a perfect world. In fact, the New York City that is shown in the film is a crime-ridden wasteland, filthy with crumbling buildings and apartments infested with rodents and roaches. But all of these things only seem to have sparked the avant-garde creativity that exploded within the filmmakers and musicians that followed Andy Warhol and prefaced today’s independent films.

This movement came to be called as “No Wave,” a product of grimy Super 8 films, inexperienced actors, non-musicians who played instruments they didn’t know how to play and plotless scripts. The movie opens with the question, “If you could be anybody, who would you be?” And this generation certainly took liberty in being anyone they wanted to be through film, a collective group of creative types that included a young Debbie Harry and a quite dashing Buscemi whose eyes did not yet have the deep-set, sleep-deprived wisdom they boast today.

It took Danhier two and a half years to make Blank City, and she achieved in collecting first-hand accounts from the major players of No Wave whose voices told the almost forgotten story themselves. Interwoven with these interviews are clips from the films that were the fruits of their poverty-stricken and drug-induced labor. Although there are plenty of interesting anecdotes to hear and a visual feast of rare, fascinating movie excerpts to see, Blank City at times loses the audience by resembling a blabbering uncle who was unquestionably cool once, but tells the seemingly same story over and over. The film also lacks a sense of chronology, and to the less-than-obsessive enthusiast, Blank City may just appear to be a cluster showcase of amateur movie making and a whole lot of crazy that was probably a side effect of too much cocaine.

It would, however, certainly appeal to film, art and music fanatics (It gives a great peek into iconic CBCG acts.) or anyone whose eyes brighten when hearing the word “indie” attached to anything. It may not be a must-see to the rest of the population, but Blank City is nevertheless a charming commemoration of an amusing culture of the past.