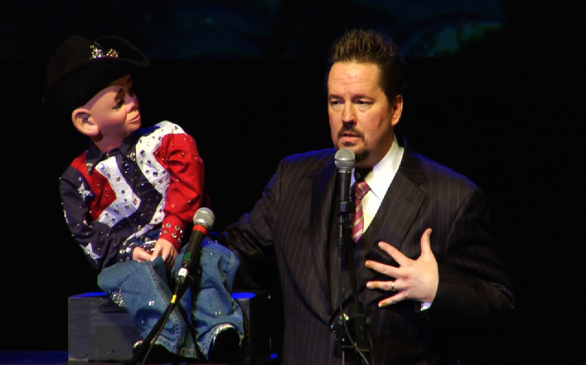 Content of character is something everyone strives to refine throughout his or her life, but what if someone turns out to be a lifeless, empty vessel? Most of the characters in Dumbstruck are just that, literally so – they’re puppets. The other characters in Mark Goffman’s debut documentary feature are the human beings behind the puppets, a troupe of ventriloquists struggling to distinguish themselves as artists in a world that does not typically pay lip service to their artistic virtues.

While Dumbstruck tries earnestly to show us the artistic toil that goes into this masquerade – including the character and lifestyle quirks of the professional ventriloquist – the mold these frozen smiled personalities are made in never sets. Dumbstruck stays at an anecdotal distance from its characters, only giving observational knowledge of the characters’ qualities it hopes to extol.

The real-life characters in question are a quintet cut mostly from a swath of the south – a geographical coincidence in connection with the Vent Haven Convention, a ventriloquists’ convention that takes place in Ft. Mitchell, Ky. every year. In a room crowded with social awkwardness emerges Dan, a rather delightful charmer who holds the coveted gig of cruise ship entertainer. He goes months at a time without seeing his wife and kids, and the reality of long-distance family life besets him with heartbreak later, something Kim, a single, lovelorn ventriloquist from Ohio understands distinctly. She plays smalltime elementary school gigs, a fact that she seems to resent more than lament with melodramatic flair. After rejection from a cruise ship act she sits passively aside. “If they could only see my passion,” she yawns – a rather pitying plea for a limelight she has not earned. On the flipside of that is Terry Fator, of “America’s Got Talent” fame, the national TV winner who snagged a 100 million dollar Las Vegas deal and a convention hall’s worth of awestruck envy. Fator is the seasoned ventriloquist Dylan, a 13-year-old ventro, hopes to be, but a wrestle with self-confidence issues and the sideways looks of a macho father seem to keep his talents closeted.

But these personal antagonisms are handled at arm’s length. You get the sense that were we to dig our nails into the depths of their characters we’d hit the foundation of clay that forms them. There is no better character to illustrate that than Wilma, an outcast woman, brutish in size at 6-feet-5-inches tall, who is on the verge of eviction from her home – a glorified abode that looks less comfortable than the blue Volkswagen Bug she impossibly maneuvers. We are told her family abandoned her and stole her son away when he was 5. For all of the drama (and legal issues) this exposition imposes, it’s never explained why it happened at all. She is oddly shaped, with exaggerated features and sense of humor. When we see her sticking a nose and a pair of googly eyes on a tree in her yard – to say nothing of the fact that she takes her puppets (performed in full character) clothes shopping at Wal-Mart without a smirk of irony – she is a close incarnate of the anthropomorphized objects she herself gives life to. But this is mere speculation, and the character of Dumbstruck, in the end, is rendered inanimate.

Dumbstruck releases in select theaters May 27.