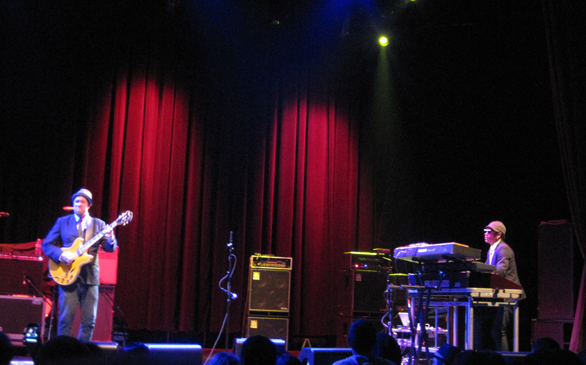 In a city where glitz and glamour often dictate perception rather than reality, it was royalty that got its chance to shine under Los Angeles’ big, bright lights on a brisk night in May. Yet, this wasn’t some sort of Prince William-Kate Middleton honeymoon tour migrating its way across America or some lavish tribute to another royal wedding. What formed one evening at Club Nokia, rather, was a marriage that brought electro hop, jazz, funk and soul together for the Royal Family’s first trip to Los Angeles in its young, yet bourgeoning history. The Royal Family was started by Soulive in March of 2009. Soulive is the founding band of the Royal Family and their own record company, Royal Family Records.

Although the room wasn’t quite filled with bodies from wall to wall, three of New York’s funkiest outfits still managed to have those in attendance bouncing off the dance floor over the course of more than four hours.

Brooklyn-based Break Science, composed of drummer Adam Deitch and producer Borahm Lee, teamed up with former Jurassic 5 emcee Chali 2na and kick started the show with bass-pumping beats that ranged from electro to dub to hip hop, performing such tracks as “Zion Station” and “Move Ya Body” off their latest EP, Further Than Our Eyes Can See.

Between Break Science’s brew of jazz, funk and soul and its rich hip-hop roots, the duo’s opening set provided a relatively seamless transition into Soulive’s own cocktail of jazz, funk, rock and soul. The trio from Woodstock, N.Y., after all, has made its mark over the past 12 years by perfecting the groove, toting fans of the jam band scene along with its already-established base of jazz and funk enthusiasts from countless festival appearances and multiple U.S. tours.

Many of those same fans who have embraced Soulive for the last decade have also shared an appetite for Lettuce’s danceable grooves as the NYC all-star collective continues to carry the torch of their funk and soul forefathers into the 21st century. But whether it was Soulive’s Beatles covers from its 2010 release, Rubber Soulive, or Lettuce’s extended jams into the wee hours of the morning, this royal family by no means left the small, though fervent crowd shortchanged before skipping town.