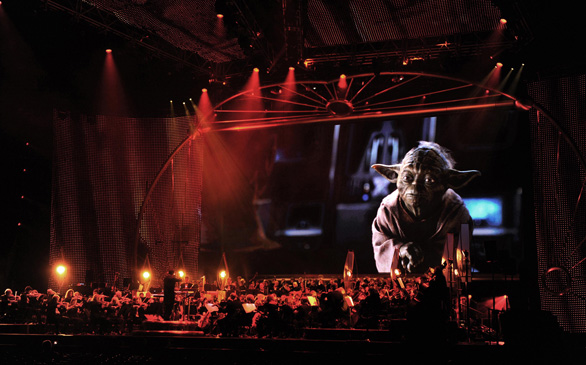 The stuff dreams are made of is a cliché that gets zero respect these days. Once upon a time in a galaxy far, far away, there was a city in the hills of Los Angeles – a town that was a part of a medium still new and golden to the world. The “Big Screen” had a meaning more powerful than most phrases heard around town. In 1977, a movie came out that changed the way the world saw not only the silver screen but life itself.

Star Wars spans over three decades, and its impact on the world of entertainment is etched in carbonite. As most of us know, the Star Wars movies have concluded, but the legend remains. Sure, there’s a 3-D version coming out, but what about something that can truly evoke the same emotion of the original three?

On June 3 and 4, the Hollywood Bowl will play host to something that is sure to lift you out of your seat and give hope to all the young Jedis in the world. John Williams, the original composer of the music from the films, will bring to life a two-hour journey from The Phantom Menace to Return of the Jedi.

“Don’t tell the producer, but I’d do it for nothing,” jokes Anthony Daniels, the actor who plays C-3PO in all six movies and narrates Star Wars: In Concert. “It’s a real treat. It’s great to be apart of a show that you utterly believe in. One of my beliefs it to tell the story well. The other one, and the Hollywood Bowl is particularly good at this: taking away the snottyness of a concert.”

As we sit in a restaurant in the Renaissance Hotel just down the street from the Hollywood Bowl, Daniels can barely hold back his childlike excitement for what he is a part of.

“The kids that come, most have never seen Star Wars, they have all seen ‘The Clone Wars.’ They come dressed up, but as characters from those movies. They haven’t seen the others yet,” laments Daniels.

It’s this kind of range and power that the series of films has that can almost be equated to the Beatles in music (The band also had their turn at the Hollywood Bowl.).

This will also be the first time ever that this show has gone on under the actual stars. Every single performance before has been in a closed-off venue. To actually sit under the stars and hear the music and watch the story come to life is sure to be like nothing in this galaxy.

As if that weren’t enough to satisfy your Star Wars fix for a few years, the infamous Star Tours ride at Disneyland has been re-imagined and gotten a full reboot. This new adventure takes you in 3D throughout the series and is led by the one and only C-3PO. The virtual journey through warp speeds will be a delight for any thrill seeker.

“I remind you that technology has improved exponentially over the years, and the technology that can now drive Star Tours is extraordinary,” interjects Daniels. “I’ll tell you, when I was working on it in Burbank, I kept missing cues because I was so astounded at the footage I was watching.”

Using hydraulics, the theater moves in 360-degrees matched with the video screen, giving each participant the idea that they really are flying. With the addition of 3D, it brings the experience in close for a very personal feel. Unlike normal movies, you pick up on other people in the room. This kind of stimulus captivates your attention 100-percent.

The thrill of the Force runs deep with all of us, and being able to jump into these two attractions are as close as many of us will get to becoming a Jedi. The performances at the Hollywood Bowl are the 3rd and 4th of June, and Star Tours opens on June 3 as well. Have fun, and may the Force be with you!