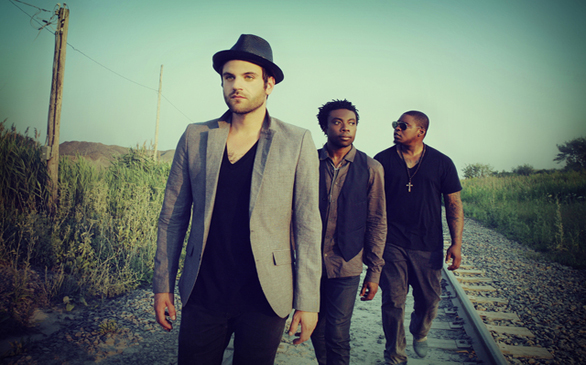 Applying a label to the music made by Canadian band Bedouin Soundclash is a little tough. They’re reggae-rockers, they play pop-oriented world music and they can get a little punky. On their new album, Light the Horizon, they explore their soul roots, something they were encouraged to do by the set’s producer, King Britt of ’90s hip-hop act Digable Planets.

“This record is really forward-looking,” says vocalist Jay Malinowski. “It’s from the point where we don’t have any baggage from the past. We’re just genuinely in the moment with this record, for the first time in a long time.”

Bass player Eon Sinclair concurs, “It’s a really optimistic and hopeful record. That’s been said about some of the stuff we’ve done in the past, but this time we’re just feeling more self-assured and more confident.”

Light the Horizon drops on June 7, and Bedouin Soundclash performs live June 3 at the Galaxy Theatre in Santa Ana and at Saint Rocke in Hermosa Beach on the fourth.

Montae Talbert, the member of Inglewood rap group Cali Swag District known professionally as M-Bone, has been killed in a drive-by shooting. Talbert was shot May 15 while sitting in a vehicle parked outside an Inglewood liquor store and was pronounced dead at UCLA Medical Center.

Cali Swag District found success with the single “Teach Me How to Dougie,” and the group was finishing up their first album at the time of Talbert’s death. As of press time, no arrest has been made, and a motive for the shooting has yet to be determined. Talbert was 22 years old.

A new traveling music extravaganza is gearing up to hit the road later this summer; the Identity Electronic Music Festival will kick off in Chicago in mid August and roll into about 20cities before it wraps up in Seattle in early September. The local stop will be Sept. 4 at an Orange County venue yet to be named where multiple stages will host Kaskade, Pretty Lights, Rusko, Avicii, Steve Aoki, Disco Biscuits, DJ Shadow, Skrillex, Pete Tong, Chuckie, Booka Shade, Modeselektor, the Crystal Method, Nero and many others. Details at idfestival.com.

Legacy Records is about to release two classic Peter Tosh albums with lots of previously unavailable material appended. Legalize It: Legacy Edition and Equal Rights: Legacy Edition are two-CD sets that include the original album and a wealth of demos, outtakes, alternate takes and dub plate tracks. The late reggae great was such an advocate for the legalization of marijuana that he was sometimes referred to in his Jamaican homeland as the “Minister of Herb.” Tosh also supported NORML, the National Organization for the Reform of Marijuana Laws, and the release of these albums comes in conjunction with this year’s 40th anniversary of NORML’s founding. Both albums drop on June 21.

Rob Zombie is getting deeper into film work and video production; he’s just finished shooting a television commercial for Woolite and a Tom Papa special for Comedy Central, and later this year he’ll begin work on his sixth feature film, The Lords of Salem. But fans of Zombie’s music needn’t fear; his band will be hitting the road in July with Slayer for the Hell on Earth tour, and before that they’ll be playing some headlining gigs including their only local stop, May 25 at the Ventura Theatre.

Former Marilyn Manson drummer Ginger Fish has joined the band, to which Zombie comments, “The band just got even weirder, and weirder is always better.”

Tori Amos has a new one on the way; look for the classically-inspired Night of Hunters to drop on classic imprint Deutsche Grammophon in September. Amos will tour this fall, but so far only European dates have been announced.

LP1 is the title of the new Joss Stone album, due July 26 on the singer’s own Stone’d Records. Dave Stewart (Eurythmics) co-produced the album with Stone.

It’s been 20 years now since Face to Face roared out of Victorville; last week they released their latest, Laugh Now, Laugh Later. Catch them in concert June 23 at the House of Blues Sunset Strip and the following day at HOB Anaheim.

Keb Mo has signed with Ryko, and his label debut, The Reflection, drops on Aug. 2.