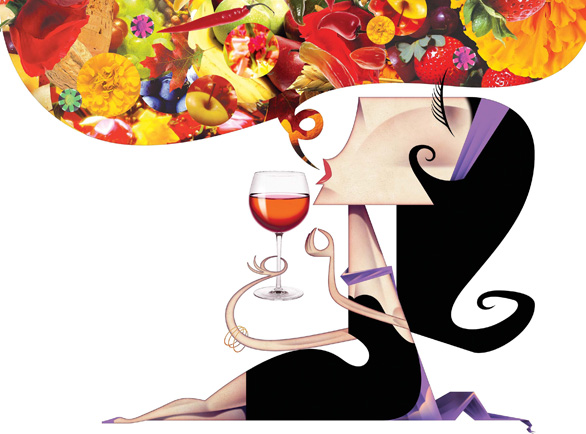 Val B. Mina color illustration of woman describing the different aromas present in her wine.
(Credit: The Sacramento Bee 2009)

As baby boomers approach their golden years, they are embracing wellness and wine- two things that don't always go together.

While a glass of red wine a day may reduce the risk of heart disease, many boomers are drinking a lot more and not realizing they are increasing their potential risks for other serious health problems, ranging from alcohol abuse disorders to chronic diseases such as high blood pressure, liver disease, pancreatitis and certain cancers, said Dr. Robert Huebner, acting director of the National Institute on Alcohol Abuse and Alcoholism's Division of Treatment and Recovery Research.

"People need to be mindful of the risks associated with risky drinking in the same way this (boomer) generation is more mindful of nutrition in general," he added. "The baby boomer generation is reading labels in the grocery store and counting their cholesterol."

Between 2000 to 2008, the number of substance abuse treatment admissions for people age 50 and older increased by 70 percent, according to a recent study by the Substance Abuse and Mental Health Services Administration. Previous SAMHSA research suggested that the number of older substance abusers may rise to as many as 4.4 million by 2020, up from 1.7 million seniors in 2001.

Most boomers won't become abusers of alcohol or other drugs, but boomers may be at a higher risk of having problems later in life related to excessive drinking or drug use, said Peter Delany, director of SAMHSA's Center for Behavioral Health Statistics and Quality

Older Americans also have more drinking-related problems due to both the cumulative effect of years of an unhealthy habit and the body and brain being older and having less restorative abilities, said Dr. Howard Rankin, a clinical psychologist in Hilton Head, S.C., who has been researching addiction since the 1970s.

In other words, the effects of drinking impact you faster as you age because your body and brain are not able to metabolize the alcohol that you consume as well or to regenerate brain cells, he added.

"I see seniors and retirees doing all sorts of things to preserve their brain function and then drinking a glass of wine or a bottle a night," Rankin said. "That's the worst thing you can do."

As you grow older, you should drink less to stay healthy, but often society gives different cues, he added. "You're retired, you're having a good time now, you don't have to work, so you start drinking at 3 o'clock in the afternoon," Rankin said. "That's the wrong way around."

Visit MarketWatch on the Web at http://www.marketwatch.com