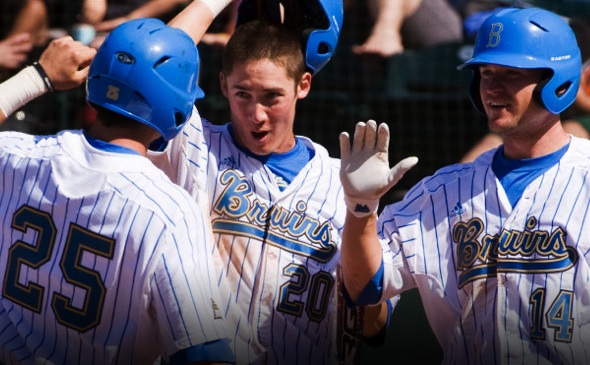 The Bruins host the NCAA Los Angeles Regional this weekend.
(Credit: uclabruins.com)
After winning two of three games at No. 8-ranked Arizona State in Tempe, the No. 23-ranked UCLA Bruins won the Pac-10 outright. Selected to host the NCAA Los Angeles Regional, the Bruins finished with an overall record of 34-21 that includes an 18-9 mark in conference action. Both the Arizona State Sun Devils and Oregon State Beavers placed one game behind.

This is the second consecutive season the Bruins host a Regional, which begins Friday, June 3, and runs through Monday, June 6 (if necessary). According to the NCAA, each of 16 Regionals features a four-team, double-elimination layout.

UCLA experienced a 2-1 loss against UC Irvine in Irvine, but quickly erased that memory over the weekend by taking two games in Arizona. Friday’s result in the opening series game proved to be significant for both squads, with UCLA topping ASU 10-3. Starting pitcher Gerrit Cole registered the win in eight innings of work while fanning nine.

Saturday saw more of the same from the Bruins, who earned their 17th NCAA Tournament berth and fifth in the last six seasons, in the pitching area. Starter Trevor Bauer (12-2) tossed his eighth straight complete game, allowing no runs, one walk and striking out 14 batters.

Additionally, Bauer, a junior native of Valencia, earned his sixth Pac-10 Weekly Award on Monday. He sports a 1.27 ERA and currently leads the nation with 189 strikeouts, which is the second-highest single-season total in Pac-10 history.

Both victories secured a series win for the first time since 2003 for UCLA. Despite a loss in Sunday’s game, the Bruins gained an outright Pac-10 Conference title since 1986 in the South Division.

Tickets for NCAA Regional games at Jackie Robinson Stadium are currently on sale. Fans will only be able to purchase tickets through UCLA’s Central Ticket Office by calling (310) 825-2101.