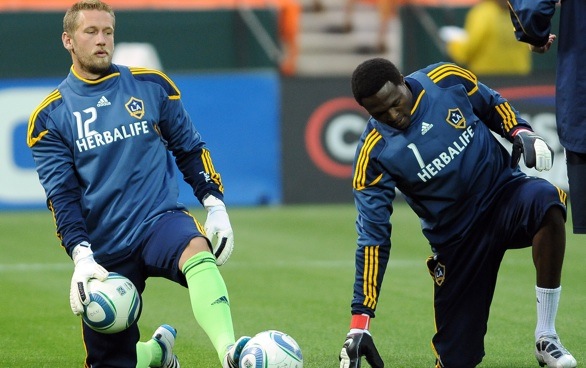 Josh Saunders will step in for Donovan Ricketts during Gold Cup action.
The Los Angeles Galaxy saw action in two games during the week, collecting two important victories for a total of six points to stay atop the Western Conference. Los Angeles went in to Massachusetts and claimed a 1-0 shutout victory over the host New England Revolution on Saturday night.

“For the most part, we controlled that game and give New England credit for their little surge at the end almost getting a goal back,” Galaxy head coach Bruce Arena says to reporters.

Argentine forward Miguel Lopez recorded his first career MLS Goal in the 69th minute of play to give Los Angeles the lead and the win, eventually. English midfielder David Beckham sent in a curling ball into the box, where Lopez’s head connected and redirected the leather into the back of the net past Revolution goalkeeper Matt Reis.

“We could see tonight we had a tired team and weren’t as sharp going forward, but their concentration was great and their desire to compete and win were great. Lopez got us a good goal,” Arena adds.

“I received the ball in a good position, and I obviously put the ball in a good position and without Miguel running into that front post area,” Beckham states. “He’s made my ball a good one. I think we deserved it, overall. I think we had a lot of chances, so we’re happy.” Lopez is the ninth different player to score for the Galaxy during this campaign.

“Miguel made a great play to score the goal, and other guys made great plays to ensure that we got the result,” team captain Landon Donovan remarks.

Before Los Angeles captured the vital road win against the Revolution, they faced the Houston Dynamo on Wednesday at home, gaining a 1-0 win.

“It was, obviously, a difficult game. I thought Houston played real hard for 90 minutes. I thought our team, for the most part, played very well. It could have been a little cleaner in trying to get another goal in the game,” Arena confesses during the post-game press conference. “I think overall we had a good night. You can see both teams were a little fatigued from the game over the weekend. But I’m naturally very pleased to get the three points.”

In stoppage time before the first half came to an end, Donovan secured a goal and victory for the Galaxy on a penalty kick. The score became Donovan’s eighth goal of the season, which is one more than he netted last season. This is his third goal that comes from the penalty spot.

“It’s not a 100-percent chance to score, but pretty close,” Donovan says of executing penalty kicks. “There’s a lot more that goes into a penalty than people realize, it’s something I work on, and something I’ve gotten comfortable at over the years. And it was good to score the goal to win the game tonight.”

Los Angeles is now 8-2-5 with 29 points on the season; this is currently a league best and is good enough to be seven points ahead of second-place FC Dallas in the Western Conference. As a team, the Galaxy has now scored a total of 20 goals, and 10 arrived from set pieces.

Arena and the Galaxy look to continue their winning ways and improved their four-game winning streak and unbeaten streak of six on Friday, June 3, as they host D.C. United in a clash of coasts at the Home Depot Center in Carson at 8 p.m.

Due to Gold Cup duty with their respective national soccer teams, both Ricketts (Jamaica) and Donovan (United States) saw their last action with the Galaxy on Saturday.

“Well, obviously we’re only losing two players right now in Ricketts and Donovan and certainly [Josh] Saunders is going to get the call in the goal,” Arena says of the situation. “With Landon, we have a combination of players we can use so we’ll make due the best we can. We’re 15 games in now. We only have four games in June, two home and two away.”