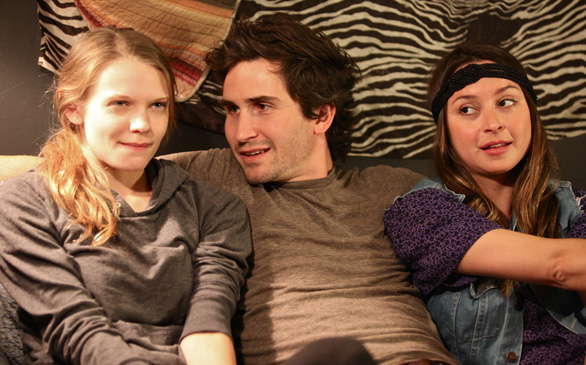 Sex. Status. Money. Those three words are the message behind the play “Between Us Chickens,” now playing at Atwater Village Theatre, starring Amelia Alvarez, Annabelle Borke and Ben Huber.

Alvarez plays Meagan, a party girl who is the roommate and best friend of Sarah (Borke), a quiet homebody and former college student. Both moved from Pennsylvania to California with a plan to upgrade their boring East Coast lives.

Several ethical and moral subjects are touched on in this dark comedy, written by Sofia Alvarez and directed by Casey Stangl. In “Between Us Chickens,” we see Los Angeles as a city with its own moral code. This is a code where practically anything goes to survive in the shadows of the rich and famous.

Eventually, Charles manipulates Sarah into what seems like a fake relationship in order to regain his family’s respect. Sarah, who appears to suffer from mental issues and a psychological setback she suffered in college, goes along with the plan even though she has really fallen head-over-heels for Charles.

Meagan, who once sought to become a pre-school teacher, gives up the nightlife and the hookups to move back home with her pregnant sister. Sarah is surprised but she stays in Los Angeles and proceeds with Charles’ unorthodox idea to make money.