The Colors of Brooke Harker 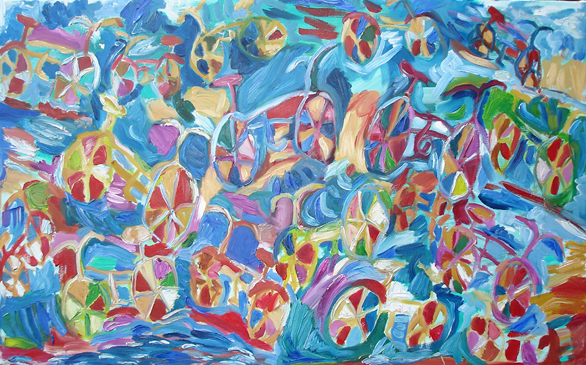 The first thing you notice is vibrant color, incredibly vivid, colorful images. A smile comes to your face. The energy practically leaps off the canvas. Brooke Harker has been painting since she was a child. In fact, she began her training at 7 years old in university art classes, right alongside her Mom’s easel – silently watching, taking it all in.

Harker was raised in Iowa, where she first started painting and continued to pursue her passion. After years of developing skills in fine arts and design for the stage, she graduated from the University of Northern Iowa with a degree in Theatre Performance and Creative Drama/Theatre in Education. Early in her career, she was offered the chance to work with children. At that point, she realized this was also a passion for her and decided to combine the two. Harker has worked extensively with children from all over the world such as Japan, China, Italy, Germany as well as the United States.

In fact, Harker’s paintings were recently featured as part of Global Art Exhibit, a non profit helping kids in need in underdeveloped regions of Tibet (TAR), China, Cambodia, Thailand and Southern India. A portion of the proceeds from this show went to helping children in a Tibetan school and orphanage.

When asked how and why Harker decided to create a bicycle series, her eyes light up as she tells her tale.

“My fascination with bicycles began the months I lived in Beijing. I had never seen so many bikes, so much variety, and a bike lane that could rival a freeway, packed with people of all ages. I photographed hundreds of bicycles that summer (people riding them, pulling couches behind them, a lady who’d put a cat in a cage above the back wheel, trailers hauling children, caged birds, televisions and several old men),” she says. “I wanted to be part of the bike river so I bought a green bike for the equivalent of $7. I discovered the faulty brakes as I nearly got hit by a bus. Luckily my rubber soled sandals scraped across the pavement and saved my life. I quickly learned Mandarin for the ‘the brakes don’t work’ and convinced an auto shop to help with repairs. As the sun set, the plan to ride across the city suspended, my friend and I were lost, locked up our bikes and took a cab home. The street signs being in Chinese characters made it difficult to record our location. I spent the rest of the summer on weekends determined to find that green bike again, but always ended up on a new adventure … dancing with a kung fu fighter in the park or eating watermelon in the home of a pregnant lady I’d met on the street and drawing her portrait. The rich moments I found in the attempt to find that green bike fed my love of life’s details.”

“Nearly a decade later, I live in Los Angeles, where a sea of crazy traffic does not create the most inviting environment for bicycles, but when I do ride, I feel free. I get to see the details that pass too quickly outside a car window. Along the bike path at the beach, I can watch bikes for hours and try to draw them as they speed by,” Harker continues. “Oceanside Ride is inspired by the recognition of these details and part of my collection Bicycle Stories, a series dear to my heart and an expression of freedom.”

Harker continues to share her work and contribute to important causes. This month, she has donated works for three different charities: Project Angel Food (feeds people in the L.A. area with HIV/Cancer) on June 4, Bosana Foundation (raises funds for orphanages in Bosnia) on June 12 and the Thirst Project (builds wells in Africa) on June 28.

This past year, two of Brooke’s pieces were featured on Fox’s hit TV show “Hell’s Kitchen.” Her work lives in various locations in the United States, Asia, Europe and Australia.

For a current list of showings and more information, visit brookeharker.com.

Art
Muralist Robert Vargas is painting a towering history of LA above the traffic
4,724 views

Art
French artist goes back to the source of the City of Angels — the L.A. River — for his new project
3,489 views
bid=||