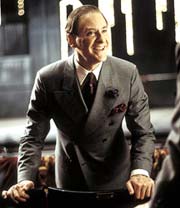 The movie musical is a far different genre today than it was 50 years ago. With films like Moulin Rouge and Chicago breaking the conventional over-the-top shtick of musicals, expectations are constantly being reformed. In De-Lovely, the life of Cole Porter, the witty songwriter of classic song and dance pieces such as "Anything Goes" and "Kiss Me Kate," is tackled in this new filmic style.

"I never really thought of this as a musical," concedes Kevin Kline, who portrays Porter in De-Lovely. "I suppose my part is, but it’s [not] the conventional musical."

Indeed, characters rarely break out into song in a surreal fashion. Music in the film consists mostly of Porter tinkering around on a piano or singing songs to those around him, accenting particular moments with lyrics or the feel of the song he’s working on. The focus of De-Lovely is that of Porter on his deathbed, looking back at his life and remembering the ups and downs of his years through his songs.

"I found it to be an interesting conceit, to have a man looking back at his life as if it were theater," Kline says with a smile, explaining the setting of the film — an empty theater where Porter’s exploits are played out. The audience is transported back through Porter’s life again and again, but always returns to that empty theater to witness the aged Porter’s reactions to his own past. The story of his life is central to the movie, but the plot often takes a backseat to Porter’s unforgettable music.

As in Porter’s life, music is everything in De-Lovely. "Cole Porter was famous for, if there was a piano in the room, just going straight for it," says Kline. From the very start, Kline admits, "I tried to get into his musical head as much as possible, and come at the character from that angle." He even went as far as mimicking Porter’s handwriting and piano playing style when feeling out the character.

De-Lovely is sprinkled with performances by major pop stars such as Robbie Williams, Alanis Morrisette, Diana Krall, Elvis Costello, Natalie Cole and Sheryl Crow. These snippets and reinterpretations of Porter’s songs serve to keep the music, which most viewers (whether they knew the songs were written by Porter or not) have heard sung by legendary singers such as Frank Sinatra and Ella Fitzgerald, fresh and new. They also serve to make the soundtrack, though it doesn’t include the film’s 30 Porter songs, worth a good listen.

Many of the songs were surprisingly sung by Kline — a man not famous for his musical proclivity — live on set, instead of pre-recording them as is customary. Kline explains that acting, singing, and dancing live were better choices for him personally.

"I found those things made it easier, because I love music and I love Porter music," he says. "And once I got it under my fingers — under my skin — it actually made it fun."

Kline is often singing in the film to Linda Porter, played by Ashley Judd, the composer’s long-time companion and wife. The unique aspect of their relationship was that their main connection was not sexual, but emotional. The film examines the nature of this non-passionate love, something absent from many films which often depend on sex to fuel the story. Kline comments on the exceptional nature of the film, saying, "It was like doing a western, but with no horses."

In many ways, both the film and Porter’s life as a whole were about a search for love. "If you look at his lyrics, he is playing with love, always questioning it," says Kline.

With a title like De-Lovely, it’s no surprise that this gem can be described with the same word. Kline smiles and concludes, "It is an exploration, a meditation on the nature of love."