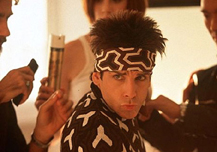 The popular "Santa Monica Drive-In at the Pier" has returned yet again and, as it is nearly the middle of August, the two-month-long series featuring free films every Tuesday night is really just getting underway. There is a whole month and a half of films left to go and, on Aug. 23, the series will feature a special on-the-pier screening of the hilarious Ben Stiller hit Zoolander.

In the film, which costars Owen Wilson, Will Ferrell and Christine Taylor (Stiller’s real-life wife), the titular dimwitted male model (Stiller) breezes through the fashion world by banking his success on one ridiculous facial expression. Things begin to change, though, when Zoolander gets caught up in a plot involving murder, manipulation and other sorts of mayhem. Stiller also serves as director on the film, for which he created the main character.

Doors for the free event open at 7 p.m. and the screening begins approximately at 8 p.m. Donations are encouraged, with money going to Arts Fighting Cancer’s "Cancer Relief Fund." Refreshments are available for purchase, and comfy folding chairs (or you can bring your own) are available to rent for $5.

The Santa Monica Pier is located two blocks south of Santa Monica Boulevard at the corner of Ocean Avenue and Colorado Boulevard. Screenings are held in the parking lot on the far south side of the pier. Free tickets required for entry are available at all five LAcarGUY locations and Santa Monica Visitors Centers. For ticket information and other details, visit www.smff.com.