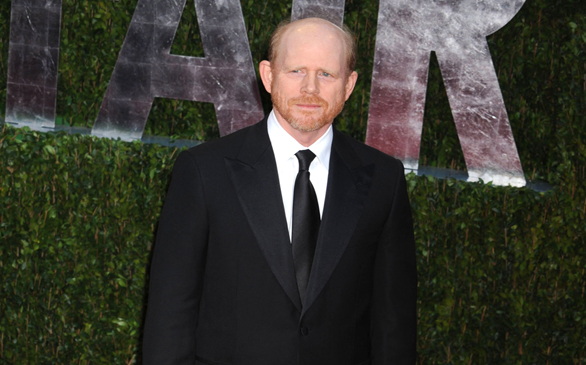 Today's youth are the most photographed and filmed generation in history and that holds a special fascination for Ron Howard, a man who knows exactly what it's like to grow up with the cameras rolling. "Whether people know it or not, they are developing a visual style, an aesthetic, a point of view about the pictures they take, they are," the Oscar-winning filmmaker said. "They are seeing the world in a different way." The 57-year-old Howard sees a poise and perspective in today's digital youth that eluded him even as a child actor on "The Andy Griffith Show" and as young star of "Happy Days" and "American Graffiti." That acting career gave way to a celebrated filmmaking career ("A Beautiful Mind," "Apollo 13," "The DaVinci Code," "Frost/Nixon") but now, seeing the impact of the digital devices on modern culture, Howard is increasingly fascinated with muse of the masses. In short, a man who grew up as the definition of Hollywood professionalism thinks he has plenty to learn from the collective amateur imagination of an audience that makes movies of their own every day. That's one of the reasons the Oscar-winning filmmaker announced an unexpected new enterprise this week _ it's a partnership with Canon for an international photo contest, but the final goal is to use the eight winning entries as creative coordinates of a short film that connects the seemingly random images within a unified story. Howard will work with the contest and the film every step of the way and be there with winners at the red-carpet event in New York later this year. For the corporate sponsor, no surprise, the hope is to get people using Canon gear as well as a new online community called Long Live Imagination. But Howard seems to be coming into the venture with the unexpected hope of finding a new method of adding creative crackle to his own filmmaking. "It's more and more difficult to find fresh stories," Howard said. "I honestly think that some version of this creative exercise is something I will do on my films forever. Not with a contest, necessarily, but this idea of using sets of images that would appear to be only loosely linked to your story _ I think that is going to push me and all of involved in this project outside of the box in a way that is fresh and exciting." Howard has plenty on his plate already with an adaptation of Stephen King's "The Dark Tower" that is planned as a multimedia epic that will spill across a film trilogy and television series. He said it's too soon to talk about specifics on that venture but it sounded as if the surreal King fantasy tale might find some of its contours with these exercises that might tilt Howard's familiar storytelling approaches. Howard has no interest in making abstract films or collages ("I'm still a fairly traditional narrative storyteller," he said) but it's clear that the overture by Canon to get involved in the contest in a big way has dovetailed with the filmmaker's own interest in the 2011 culture of camera. Howard knows his audience is changing in the way they see things; he also knows that a society of photographers leads to an interesting conversation on viewers and viewpoint. "People are seeing the world in a more detailed and specific way and tastes are shifting as well," Howard said. "Whether it's snaps off a phone or the people that get hold of something superior that they can get more creative with _ gear that allows them to carefully compose and shoot images as art _ what's happening is everyone is quietly developing a sensibility. It's part of our contemporary life. I think people are far more creative than they allow themselves to believe or trust. I want to see where they go." As for the contest itself, submissions can be made through June 14. Photos will be selected to represent eight movie "themes": Setting, time, character, mood, relationship, goal, obstacle and the unknown. The entries will be narrowed by the online community, by Canon's panel and by Howard. Eight winning photos will become "the basis and inspiration" for a short film. For details and rules visit: www.youtube.com/imagination "It's a little bit like the game you sometimes play where you start with a few lines on a blank page and see what you can build out of that by passing the page around from kid to kid and parent to parent and watching this picture that is built out of the lines," Howard said. "I love the idea of engaging in that way with all of the photographers out there. And I want to engage with the ideas, too."

Interviews
Mary McNamara: After losing a child, 'Pieces of a Woman' filmmakers channeled their grief into art
377 views

Interviews
Ai Weiwei on activism in the US, his art response to COVID-19 and a secret Wuhan film
991 views