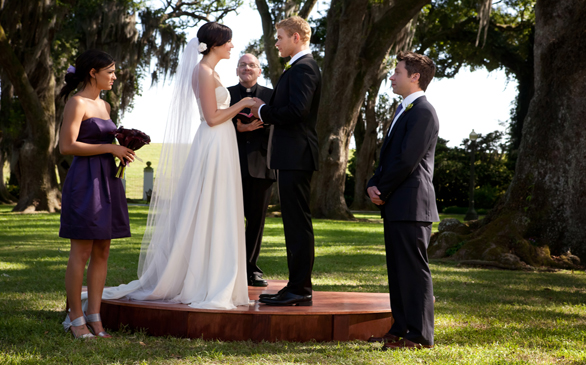 Obsession can be a scary thing, especially for perfectionists like Eva (Mandy Moore). Once they have identified a little flaw, it suddenly becomes the driving force of their lives, a crazy obsession, making them sacrifice their (perfectly adequate) rest of their lives just to fix this little thing until everything else falls apart in the process. They become maniacs in their search for perfection; no matter how many times they are told to stop, they show no signs of slowing down until their so-called “problem” is solved.

If I have just written an introduction to a deeply disturbing psychological drama, my apologies – but don’t worry, this movie is just another Moore-esque romantic comedy. Love Wedding Marriage, the directorial debut of actor Dermot Mulroney, stars Moore as Eva, the marriage counselor who has it all until her parents suddenly announce that they are getting a divorce. From that point on, Eva dedicates her life and energy to fixing her parents’ marriage, even if that means giving up her sweet newlywed days with her insanely hot hubby Charlie (Kellan Lutz). In the chaotic weeks leading up to her parents’ anniversary party, Eva realizes that she might be saving her parents’ marriage at the expense of her own.

This movie has all the necessary ingredients for a good romantic comedy: a perfectionist heroine, a little conflict to drive her insane and a gorgeous blond prince to rescue her and take her away to his vineyard kingdom in his expensive convertible. What turn this into a hodge-podge stew, however, are all the unnecessary add-ons. From Eva’s dad (James Brolin) performing bizarre Jewish rituals to Charlie’s pre-wedding secret, the film has too many side-plots that are not only hazy in origin but are also irrelevant to the main storyline.

The peculiar miscasting further contributes to the sinking of the film. While Moore had her fair share of success in other similar genres, she seems to have a hard time grasping the characteristics of an intelligent doctor and thus lowers the credibility of her role (Katherine Heigl, anyone?). And how can the viewers, who have probably indulged in an episode or two of “Gossip Girl,” see Vanessa the smart Brooklyn outcast (Jessica Szhor) as Eva’s party girl sister? It just seems like all the actors were trying so hard to be characters whom they just couldn’t play – that is, except for Lutz, whose main job was to be the hot eye candy that he already is.

If you are a Twilight fan and would like to see the blond version of Lutz and his glorious abs, then go watch this movie. If you are looking for a good wedding rom-com, then you might be better off opting for something else – there seem to be plenty of choices in the theaters these days.