Nuremberg: Its Lesson For Today 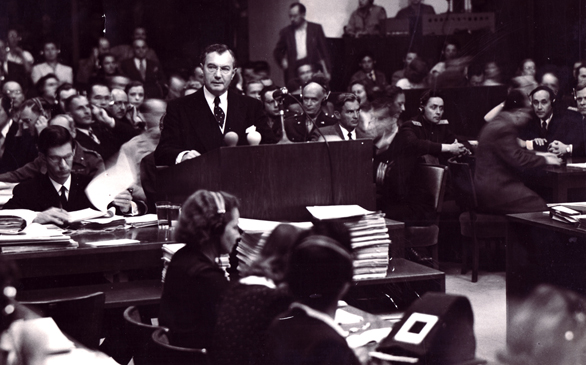 Maybe the greatest sign of confidence a criminal can have is documenting his or her own crimes. The Holocaust footage taken by the Nazis during their regime, as well as the period that foresaw their large-scale oppressive reign of power, takes this to a terrifying extreme. If you’ve been through basic schooling or have ever watched the History Channel, you’ve seen the horrifying images that have accumulated in our collective memory since the end of the Second World War: the shattered storefronts and bonfires, the human medical experimentation and starvation imposed on the European Jewish populace and the mountains of corpses.

As frequently as we see these images their power is never diminished. Yet, in the newly restored documentary Nuremberg: Its Lesson for Today, the faces of the perpetrators – clean shaven and neatly dressed – sit in two civilized rows in a courtroom, where their crimes unfold to us using unending reels of torture footage, film the Nazis themselves shot for their own posterity, that adds startling life to all of the still photographs that we’ve seen repeatedly.

For any Holocaust denier still left out there (and they do exist), the newsreels seen here flatly refute them. It’s always been difficult to understand how a case for Holocaust denial ever grew any legs, but it’s hard to argue with the willfully ignorant. And there it is in grainy black and white, every starved human frame, every corpse piled up like animal carcasses; the picture does not lie, Photoshop did not precede these crimes.

The Nuremberg Trials took place and were filmed from 1945 to 1946, but the release of Nuremberg was withheld in the United States for political reasons. Originally directed by Stuart Schulberg, the footage was found and restored by Schulberg’s daughter Sandra Schulberg and Josh Waletzky at the beginning of the last decade. It has releasing in theaters for audiences to see this exposé of Nazi war crimes, including up-close views of its key players and propagandists (Hermann Göring and Martin Bormann, two of the most notorious), and is narrated by actor Liev Schreiber.

Nuremberg: Its Lesson for Today releases in select theaters June 3.