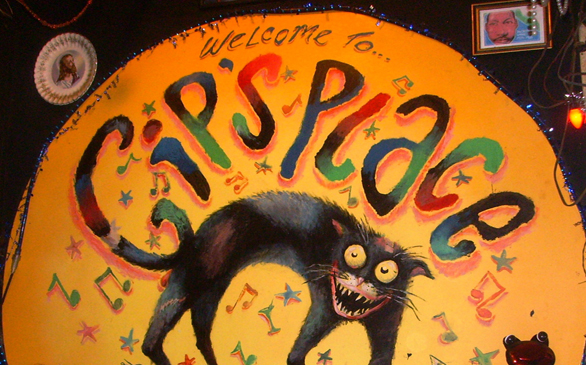 If you’re a music lover and your travel plans this year take you to the southeast portion of the country you would be wise to find a highway into Alabama. Or a country lane or side street; really any road that crosses the border into the Yellowhammer State will do. This is the Year of Alabama Music, and the entire state is anxious to share its music and musical heritage with you, including that of a place you’ve probably never heard of that, once visited, will remain in your memory forever.

If the live music venue known as a “juke joint” was an animal, it would be on the endangered species list. Very few of these out-of-the-way places where no-frills blues music is played are in existence today. In fact, there is only one in Alabama, and it is perhaps the most authentic place in the country to experience this type of musical Americana. Not that there’s anything fancy about Gip’s Place, the Birmingham-area juke located in the backyard of its namesake owner, Henry Gipson.

Gipson is a gravedigger by trade and a bluesman by choice, and most Saturday nights find him onstage, Fender guitar strapped on and his favorite accessory, a bottle of whiskey, always within reach. Gip’s is decorated in true juke joint fashion: The walls are covered with autographed posters of famous players, tacked up between strings of Christmas tree lights, with a picture of Jesus or an ad for a barbeque joint placed here and there. A neon sign reminds you that you’re in Gip’s Place, something that may come in handy if you overindulge in the jars of moonshine being passed around – Gip’s doesn’t sell booze, but you can bring your own and there’s always moonshine around (The homebrew is legal here in small amounts so long as it is not sold.).

After a brief blessing is spoken, Gip and his pick-up band blast the tin roof off the ramshackle joint, playing blues standards and lively favorites that keep every open inch of floor packed with dancers. Gip himself will eventually make it out into the crowd, usually overflowing into his back yard, to collect the hugs he’s earned as the local blues king and beloved all-around good guy. The camaraderie (and moonshine!) always make for a good time at Gip’s no matter who’s playing – word has gotten around, and big stars stop in to jam on a regular basis – everyone from Otis Rush to the Allman Brothers have found their way to Gip’s Place.

Gip’s is located in a residential district in Bessemer where the streets tend to twist and turn, and your GPS may not be accurate but detailed directions and a phone number can be found at myspace.com/gipsjukejoint. With few exceptions, Gip’s is only open on Saturday nights.

Gip’s Place is a perfect example of exactly why Alabama is spending a whole year promoting its music scene; the state is full of “hidden” gems anxious to be discovered by visiting music fans. Of course, there are plenty of well-known places in Bama to put on your route too.

In Birmingham you can visit the memorial to the late Eddie Kendricks, the soul singer who co-founded Motown super-group the Temptations and then went on to have solo hits like “Keep On Truckin’” or stop in at the Alabama Jazz Hall of Fame where if you’re lucky you’ll meet Dr. Frank Adams who’ll tell you stories about his days playing in Duke Ellington’s band or about his time as a sideman with Birmingham’s favorite oddball, Sun Ra.

In Montgomery you’ll find the Hank Williams Museum, a surprisingly large space packed with all kinds of memorabilia including the Cadillac that the country legend was riding in when he died. Hank’s burial site is nearby; William’s (estranged) wife Audrey is also buried here under the white marble markers that are a mix of the sober and the gaudy. And who could forget Muscle Shoals, Alabama’s recording studio capital where everyone from Aretha Franklin to the Rolling Stones have recorded and whose band the Swampers were immortalized in the Lynyrd Skynyrd hit “Sweet Home Alabama.” Indeed, step foot in Alabama and you’re instantly on track to have fun with music.

Maps and information about the Year of Alabama Music can be found at alabama.travel.