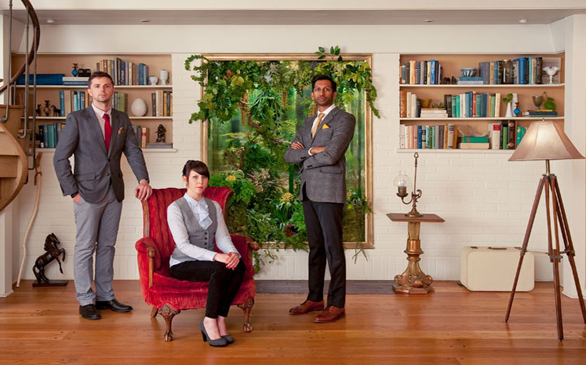 An early 7 p.m. set might have contradicted the band’s moniker, but the One AM Radio nonetheless delivered an electric folk feast that can measure up to the kind of serene euphoria that one usually experiences well past midnight. Combined with the Echo’s intimate and dingy atmosphere as the perfect backdrop to Hrishikesh Hirway’s wistfully melodic voice, it became easy to forget that the sun was still up outside the building.

Supporting his vocals and electronic beats were band mate Scott Leahy on guitar and guest singer-songwriter Sara Lov, whose angelic and earthy voice complemented that of Hirway’s. This show was the final stop of the One AM Radio’s West Coast tour with Chicago band Houses, only a few minutes away from the group’s home base of Los Feliz. They performed familiar tunes from past albums and new tracks from their latest Heaven Is Attached by a Slender Thread that came out in early April.

Hirway is charismatic and unassuming on stage, even clumsy at times – he almost drops his equipment in the middle of performing a song, but that’s part of his charm of course. The musician even jokes that because of the lights, it’s hard for him to see the audience but he was assuming that everyone was dancing, considering that 7 p.m. was primetime for a party.

The set concludes with two songs from the new album. In “Everything Falls Apart,” Hirway combines lyrics of longing with beautiful, more cheerful beats. “Sunlight,” on the other hand, is a catchy, melancholic ballad set in Los Angeles, which epitomizes the band’s whole range of music, reminiscent of “the feeling you get while driving home, fast, late at night, through half-empty streets.”

The One AM Radio put up an amazing show that encapsulated what independent and collaborative creativity is all about. And on May 21, rumored doomsday (however fanatical that whole thing was), hearing a talented band like the One AM Radio in a dingy club isn’t a bad final earth experience at all.