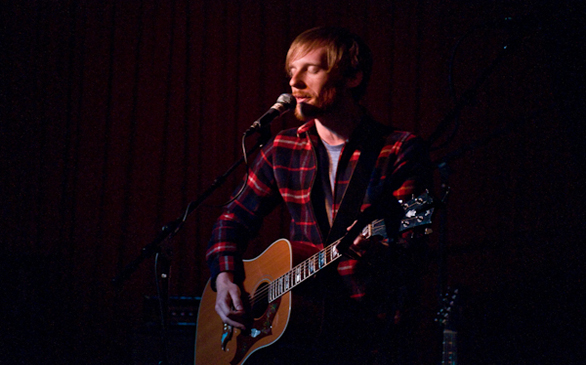 Kevin Devine’s residency at the Hotel Café was the perfect small-venue show. On the night that I went, we were surprised with a set by Josh Regan who played just before Devine. Regan, fresh off of surgery, played beautifully and thanked the audience for “being the guinea pigs” for his healing throat. Healing throat or not, the performance was fantastic and the perfect way to open.

Following, Devine came to the stage with humor and beautiful music late into the night. His banter with the audience was as entertaining as the music itself, filled with dry humor and crowd interaction. Keeping the mood light, Devine joked with the audience about new equipment for the band and a mutual love growing between himself and members of the audience. It made for a fun evening.

For a number of songs, the band – consisting of many multi-talented musicians – joined him on stage. The rest of the night, he played on guitar and serenaded the audience on his own on stage. Call me a romantic, but Slip the Country, Split the Street track “You Are the Daybreak” caught my heart, and I think I can safely say the same for the rest of the audience.